Arbirlot is a village in a rural parish of the same name in Angus. The current name is a contraction of Aberelliot, meaning "Mouth of the Elliot".[1] It is situated west of Arbroath.

The main village settlement is on the Elliot Water, 2.5 miles from Arbroath. There is a Church of Scotland church and a primary school.

Kelly Castle (sometimes Kellie Castle or Auchterlony Castle),[2] which overlooks the Elliot Water, is a four-storey tower of the late 15th or early 16th Century, set within a 19th-century courtyard. It was a stronghold of the Mowbray family until forfeited to the Stewarts in the early 14th century and was restored from a semi-ruined state [2] by the Earl of Dalhousie in the 19th century.

In the 18th and 19th centuries Arbirlot was principally occupied by handloom weavers and farmers, Arbirlot once had a meal mill, a slaughterhouse, two schools, a post office, a savings bank, an inn, a parish library as well as a number of shops.[1][3]

The parish is believed to be the original home of Clan Elliot, which was transplanted to the border counties to defend Scortland, under the newly crowned Robert the Bruce, from invaders through an intricate network of peel towers. The Elliots joined the clans of Armstrong, Scott, Douglas, Kerr, Nixon, Hepburn and Maxwell in this effort, and like them, the family became notorious border reivers. The Elliots appear in such books as The Border Reivers and Outlaws of the Marshes, describing their doings after Arbirlot. 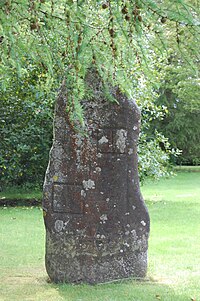