Acton Burnell Castle is a 13th-century fortified manor house, located near the village of Acton Burnell in Shropshire. It is believed that the first Parliament of England at which the Commons were fully represented was held here in 1283.

Today all that remains is the outer shell of the manor house and the gable ends of the barn. It is a Grade I listed building.[1]

The manor house was built in 1284 by Robert Burnell, Bishop of Bath and Wells, friend and adviser to King Edward I. Its position was important at the time because it was near to Watling Street, the old Roman road and still an important route.[2]

The extent of the estate is not known, as much of the building has been completely destroyed or remains undiscovered. It would have been substantial enough to accommodate Edward I and his retinue, soldiers and advisers, but was never an actual castle.

All that remains of the first Parliament building

Robert Burnell was granted a royal licence to crenellate and fortify the manor on 28 January 1284. The building was rectangular with a tower at each corner. It was three storeys high consisting of a hall, solar, bedrooms, offices, chapel and kitchen.[2] Robert Burnell also built the nearby Church of St Mary and the surrounding village.[2]

Before this, in the autumn of 1283, Edward I had held a Parliament at Acton Burnell, presumably in the adjacent great barn,[2] the only building large enough. It is significant in that it was the first time in English history that the law-making process included the Commons. The law passed became known as the Statute of Acton Burnell, a law giving protection to creditors, indicating the increasing significance of merchants during those times.[3]

When Robert Burnell died in 1292, the estate was passed down through the family line, eventually becoming owned by the Lovels of Titchmarsh, through a marriage. Following the Battle of Stoke Field in 1487, the land was confiscated by King Henry VII, who in turn granted it to Thomas Howard, 2nd Duke of Norfolk.

By the time the castle had passed to the Smythe family in the mid-17th century, it had been mostly demolished. Today Acton Burnell Castle is maintained by English Heritage. All that remains open to the public is the shell of the former private residence, accessible by a footpath through a small wood.

This hall was built near to the castle in 1814 by the Smythe family. The hall is in classical style and is a Grade II* listed building.[4] It is surrounded by parkland, with two lakes and a Gothic folly (Sham Castle). This folly has round towers, gothic windows and dates to 1780, standing on a mound in a field surrounded by trees. It was built for Sir Edward Smythe by Joseph Bromfield and used by the Smythe family as a music room. [5]

Acton Burnell Castle was another folly in the grounds.[2] Large entrance doors were knocked through the private residence buildings. A pyramid roof structure was placed on top of a tower, turning it into a dovecote. 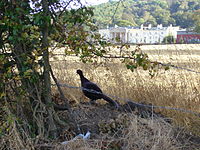 Monks from the monastery of St Gregory’s, Douai, took refuge with Edward Smythe, the 5th baronet, until his death, whereupon they moved to Downside in Somerset in 1814.

The relatively modern Hall and surrounding land is now a privately owned college, Concord College.[6] The gable ends of the great barn, where the parliament sat, survive and are situated on the private land.[4]