Abbeycwmhir is a village in the valley of the Clywedog brook in Radnorshire. Its name means "Abbey in the Long Valley".

The village is named after Cwmhir Abbey, the Cistercian abbey built there in 1143. It was the largest Abbey in Wales but was never completed. Its fourteen bay nave was longer than Canterbury and Salisbury Cathedral naves and twice as long as that at St. Davids. It was a daughter house of Whitland Abbey, and constructed at the behest of three sons of Madog, the then Prince of Powys. The first community at Dyvanner, "Manor House") failed because of the intervention of Hugh de Mortimer, Earl of Hereford but in 1176 Rhys ap Gruffydd of Deheubarth re-established the Abbey on land given by Cadwallon ap Madog. Llewelyn ap Gruffudd is buried near the altar in the nave. The abbey was burned by the forces of Owain Glyndŵr in 1401. At the Dissolution of the Monasteries in March 1537 only three monks lived in the abbey.[1]

The Abbey was slighted in 1644, during the Civil War, although some ruins still remain. There is a memorial stone to Llywelyn ap Gruffudd, the last native Prince of Wales of direct descent, whose body is buried there.[1] 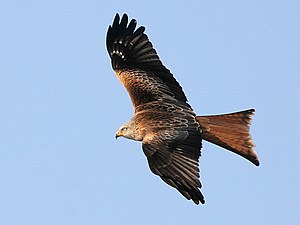 Red Kites flourish in the valley.