Ab Kettleby is a village in northern Leicestershire, three miles north of Melton Mowbray. It has a population of 501.[1]

Ab Kettleby is in the coal mining district of northern Leicestershire, close to the border with Nottinghamshire, though it is not a mining village in itself. Its nearest town is Melton Mowbray.

The village despite its modest size has a primary school, a public house named after the Sugarloaf Mountain in Brazil, a community centre, a guest house, a 17th-century manor house, and medæeval farmhouses and farm buildings. One of those farms was home to racehorse Desert Orchid for several years. The Sugar Loaf is the surviving local pub and, from its prominent position on the bends of the main Nottingham to Melton highway, offers both traveller and locals excellent fare.

It also has a village duck pond next to a large horse-chestnut tree and megalithic spring. A public telephone box, once a common site throughout Britain but now a protected building, has been released to the protection of Ab Kettleby's council who are looking for ways to preserve and pay reverence to this icon of British life. [2] At the time of writing, September 2010, they are looking for ideas. 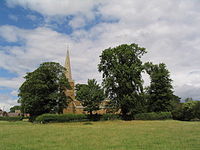 Also within the village is a Holy Well which is near the village pond, surrounded by orange-coloured ironstone cottages indicative of this area. According to Tony at Megalithic Portal [3]. . . " Traditionally, it provided a good supply and never ran dry. After the construction of new houses nearby in 1992 the well dried up, but by 2001 was flowing copiously again. Unfortunately in 2001 an ugly metal grating was fitted that blocks all access to the water. The present well structure is a truncated pyramid just over a yard high and surmounted by what at first glance appears to be an upturned font but was probably a previous basin for the well."

Ab Kettleby was first recorded in the Domesday Book as Chetelbi,[4] though a Roman mosaic and pavement was found beneath the churchyard, indicating the antiquity of the village beyond 1086.[5]. Unfortunately this previous building and a ditch running from north to south across the nave have caused serious structural problems for the church that require expensive attention. The church has a congregation that is determined to save this ancient church and is actively involved in the organisation of events to raise funds.

St. James Church has a Norman font, and a memorial to Everard Digby of the Gunpowder Plot. 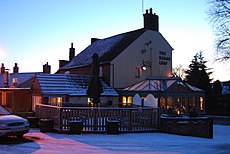