A tributary of the River Allen, formerly known as the Wimborne, snakes its way through the village.[2]

The renowned botanist, Emile Campbell-Browne, lived in Wimborne St Giles from 1880 to 1890,lodging at the Avenue Lodge between his various academic postings.

In 2001 the population was 366, served by the village hall, post office, parish church, and a primary school. Recreational enterprises include commercial shooting, a trout farm, and fly fishing on the River Allen. The village is largely agricultural, with residents generally commuting to nearby cities and towns for employment.

Wimborne St Giles sits in the wooded valley of the River Allen, near the royal hunting ground of Cranborne Chase. As originally divided, various parishes and villages resided within the hundred, including the parishes of West Woodyates, St Giles, and All Hallows. The tithing of All Hallows is located in the village, as well as the eponymous parish of Wimborne St Giles.[4]

In 1086, the village of All Hallows was considered the more prominent of the two villages. The Domesday Book reveals the existence of a church in All Hallows, which served as the principal church for the area. At the time of the survey, there was only a small chapel in the village of St Giles.[4]

Early property owners in St Giles included the Malmayne family. Matilda Malmayne, heiress of the Malmayne estate, married Edmund Plecy. Ownership of the estate encompassing the present-day St Giles House has not changed hands through purchase since the Norman Conquest. In 1375, the manor estate was known as St Giles Upwymbourne Plecy.[2]

The Plecy male line became extinct towards the end of the 14th century, and the estate was transferred to Edmund and Matilda's descendant Joan Plecy, as heiress. Lady Joan Plecy was soon married to Sir John Hamelyn (d. 1399), Sheriff of Somerset. When Hamelyn died, there were no male heirs. The estate went to Sir John's daughter Egidia, by his second wife, who married Robert Ashley. The family estate, initially known as the Ashley Manor, has belonged to the Ashleys and Ashley-Coopers ever since.

The cornerstone of St Giles House, home to the Earl of Shaftesbury, was laid by Sir Anthony Ashley-Cooper, (then 2nd Baronet), later Anthony Ashley-Cooper, 1st Earl of Shaftesbury on 19 March 1650.[5] The country house was built on the remains of Ashley Manor. Incorporating late mediæval work in the basement and cellars, the continued construction of the main body of St Giles House was initiated in 1651.

When the Earl of Shaftesbury built a new country house close to St Giles, the writing was on the wall for All Hallows. In 1672, Sir Anthony wrote to the Keeper of the Great Seal, offering to give King Charles II a living of his choice in exchange for being allowed to close down the living of All Hallows and concentrate worship at St Giles, following the opening of the newly rebuilt in 1732. The 1st earl's request to the king was granted in 1733, at which time, the St Giles and All Hallows parishes were merged. 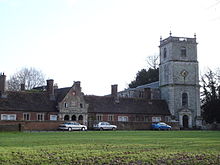 The village has a school, a pub called The Bull, a church, a post office and a village hall. The River Allen runs through the village. Every year the village holds a fete, which sometimes features a duck race.

The church has a plaque in commemoration of robins which nested in the communion table in 1887 and again in 1908.