Turriff is a town and parish in Aberdeenshire adjacent to the border with Banffshire. It is approximately 166 feet above sea level, and has a population of 5,708. The western boundary of the parish also forms the county border.

Turriff is known locally as Turra in the Doric dialect of Scots. The name appears to be Scottish Gaelic in origin, from "torr" meaning a mound or round hill, or "tur" meaning a tower.

Turriff has a primary school (Markethill Primary School) and a secondary school (Turriff Academy). People from the surrounding areas, including the villages of Cuminestown, Fyvie and King Edward attend the secondary school.

Bank of Scotland, Royal Bank of Scotland, Alliance & Leicester, Clydesdale Bank and Lloyds TSB have branches in the town. The main supermarket chains were Somerfield and Co-op and there are numerous specialist shops including two dispensing pharmacies. The Somerfield store has been bought by Tesco and was relaunched as a Tesco store in the autumn of 2009. The town has a library, a sports centre and a recently renovated swimming pool. Not to mention several excellent services up in the industrial estate such as hairdressers, building suppliers and a thriving women's exercise centre.

Turriff has a football team called Turriff United FC, who play in the Highland League. 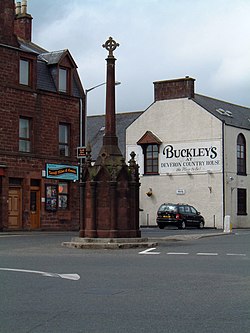 Turriff was notable as the scene of the very first engagements of the Wars of the Three Kingdoms (1639-51). Early in 1639, the Marquis of Huntly assembled his forces here, and thereafter went to Kintore in lower Aberdeenshire, eventually marching from there to Aberdeen itself. The Marquis — being informed shortly after his arrival in Aberdeen that a meeting of Covenanters was to be held in Turriff on the fourteenth of February — resolved to disperse them, by occupying the town with 2000 men. The incident was known as the "Raid of Turriff" and was followed a few days later by a minor engagement known as the "Trot of Turriff".[1]

More recently, the 1913 Turra Coo incident in the parish was the result of a local refusal to pay National Insurance when this was introduced by Lloyd George's government.