Toseland is a village in the south of Huntingdonshire.

It is one of the county's smallest villages but Toseland is still a thriving country village. It stands on a plateau north-east of St Neots and eastward of Great Paxton. It has only a few buildings but the variety of their styles, from 17th to 20th Century, indicates something of Toseland's long history.

It is not mentioned by name as a manor or village in the Domesday Book and Toseland appears then to have been one of the berewicks belonging to Great Paxton. It does appear though as Toselunt in the name of the Toseland Hundred.

Toseland Hall is one of the county's finest examples of 17th Century domestic architecture. The Church, restored in 1875, retains its Norman south doorway. Less visible is the mediæval moated enclosure in Toseland Wood and nearby, the sites of wartime airfields at Yelling (1914-18) and Graveley (1939-45)

Toseland has given its name to the Toseland Hundred in which it lies and which takes in the southern quarter of the county.

Quite nearby Toseland is Hemingford Grey, the former home of Lucy M. Boston, who used the name extensively in her Green Knowe books, inventing the imaginary placenames "Fen Toseland", "Toseland St Agnes" and "Toseland Gunning", and using it as a recurring first name in many generations of the same family. 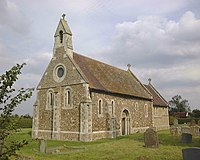