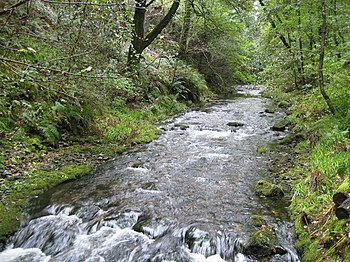 The Lyd at Lydford 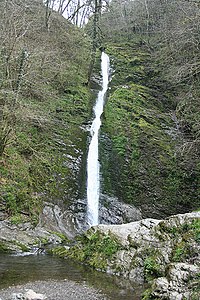 The Lyd is a river of western Devon. It rises at Lyd Head on Dartmoor and flows to the River Tamar beyond Lifton. The Lyd gives a name to the village of Lydford, around which it curls, deep in the famous Lydford Gorge.

Lydford Gorge is a dramatic feature of the river at Lydford on the edge of the National Park; it is a 1.5-mile-long gorge near Lydford on the River Lyd, and the deepest in the West Country. It was formed by the process of river capture, where the start of a nearby river eroded backwards until its origin intersected with the Lyd diverting its course into the second channel.

The Gorge has been owned and maintained by the National Trust since 1947.

Features in the Gorge include the 100-foot-high 'White Lady Waterfall' and a series of whirlpools known as the 'Devil's Cauldron'.