Kilkenny Castle is a castle in the town of Kilkenny, in County Kilkenny. It was built by Strongbow in 1195 to control a fording-point of the River Nore and the junction of several routeways. It was a stronghold of Anglo-Norman rule in Leinster and in its original thirteenth-century condition it would have formed an important element of the defences of the town with four large circular corner towers and a massive ditch, part of which can still be seen today on the Parade.

The property was transferred to the people of Kilkenny in 1967 for £50[1] and the castle and grounds are now managed by the Office of Public Works. The gardens and parkland adjoining the castle are open to the public. The Parade Tower is a conference venue. Awards and conferring ceremonies of the graduates of "Kilkenny Campus" of National University of Ireland, Maynooth have been held there since 2002.

Burials in the crypt include Aoife MacMurrough, daughter of Dermot MacMurrough the last King of Leinster and wife of Strongbow.

Ownership of the castle

Kilkenny Castle has been an important site since Richard de Clare, 2nd Earl of Pembroke, commonly known as Strongbow constructed the first castle, probably a wooden structure, in the 12th century. The Anglo-Normans had established a castle in 1173, possibly on the site of an earlier residence of the Mac Giolla Phádraig kings of Osraighe.

Kilkenny formed part of the lordship of Leinster, which was granted to Strongbow. Strongbow’s daughter and heiress, Isabel married William Marshall in 1189 (and who was later named Earl of Pembroke). The Marshall owned large estates in Ireland, England, Wales and France and managed them effectively. He appointed Geoffrey fitz Robert as seneschal of Leinster and so began a major phase of development in Kilkenny, including the construction of Kilkenny Castle and the agreement of rents and privileges with burgesses or citizens of the borough. The first stone castle on the site, was completed in 1213. This was a square-shaped castle with towers at each corner; three of these original four towers survive to this day

James Butler, 3rd Earl of Ormonde, bought the castle in 1391 and established himself as ruler of the area. The powerful Butler family were to be the owners of the castle for over 500 years. 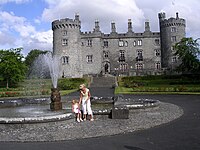 Kilkenny Castle, the signature symbol of the Mediæval city

The Kilkenny Castle Restoration Committee handed the castle over to the State, and it has since been refurbished and is open to visitors. There are ornamental gardens on the city side of the castle, and extensive land and gardens to the front. It has become one of the most visited tourist sites in Ireland. Part of the National Art Gallery is on display in the castle.

The castle seen from the River Nore

Richard de Clare (also known as Strongbow) and other Norman knights came to Kilkenny in 1172, the high ground beside the River Nore was as an ideal site on which to build a wooden tower. He built a wooden castle of the type known as motte-and-bailey.

This strategic site was where the local Kings of Osraige had their chief residence before the Norman invasion.

The castle was owned by the seneschal of Kilkenny Sir Gilbert De Bohun who inherited the county of Kilkenny and castle from his mother in 1270, in 1300 he was outlawed by Edward I but was reinstated in 1303, he held the castle until his death in 1381. It was not granted to his heir Joan, but seized by the crown and sold to the Butler family.

The Castle became the seat to a very powerful family, the Butlers of Ormonde. The Butler family (who changed their name from FitzWalter in 1185) arrived in Ireland with the Norman invasion. They originally settled in Gowran where James Butler, 3rd Earl of Ormonde built Gowran Castle in 1385. The family had become wealthy and James bought Kilkenny Castle in 1391 and established himself as ruler of the area. The Butler dynasty then ruled the surrounding area for centuries. Many of the family, including James, 3rd Earl of Ormonde are buried in St Mary's Collegiate Church Gowran.[3]

Among the many notable members of the Butler family was Lady Margaret Butler (c. 1454 or 1465–1539) the Irish noblewoman, the daughter of Thomas Butler, 7th Earl of Ormond. Lady Margaret Butler was born in Kilkenny Castle. She married Sir William Boleyn and was the paternal grandmother of Anne Boleyn, second wife of King Henry VIII of England and mother of Queen Elizabeth I.

By the 18th century, the castle had become run down, reflecting the failing fortunes of the Butler family. However, some restoration was carried out by Anne Wandesford of Castlecomer, who brought wealth back into the family upon marrying John Butler, 17th Earl of Ormonde.

In the 19th century, the Butlers then attempted to restore the castle to its original mediæval appearance, also rebuilding the north wing and extending the south curtain wall. More extensions were added in 1854.

View from the river, 1841 by William Henry Bartlett 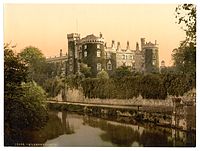 The Castle in the 20th Century

The Castle continued to be the principle seat of the Marquesses of Ormonde and their families until 1919, when James Butler, 3rd Marquess of Ormonde died. As Lord Ormonde had only two daughters, it was agreed that in order to reduce the double-taxation of the estate that his brother and heir, Arthur Butler, 4th Marquess of Ormonde would forgo his inheritance in favour of his son, George Butler, 5th Marquess of Ormonde who used the courtesy title 'Earl of Ossory'. Lord and Lady Ossory took up residence in the Castle in 1921, with their children Antony, Viscount Thurles and Lady Moyra Butler. In the 1920s and 30s, the succession of the title and estates seemed secure, with three generations of direct male heirs still living. In 1938, Arthur, George and Antony Butler agreed to resettle the Trust in which the estates were held. 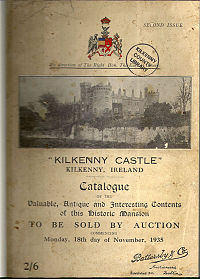 George Butler, Earl of Ossory and his family remained living in the castle until 1935, when they sold its contents for £6,000, moved to London, and abandoned it for thirty years. The impact of rising taxes, death duties, economic depression and living costs had taken their toll. While the Ormondes had received £22,000 in rental income in the 1880s, investment income in the 1930s was in the region of £9,000 and by 1950 these investments yielded only £850. They disposed of the bulk of their tenanted estates in Tipperary and Kilkenny, 21,000 acres, by 1915 for £240,000. Death duties and expenses following the death of James Butler, 3rd Marquess of Ormonde in 1919 amounted to £166,000.[4]

Antony Butler, Viscount Thurles died unexpectedly in 1940, and therefore after the death of the 4th Marquess in 1943 and the 5th Marquess in 1949, the estate was inherited by Arthur Butler, 6th Marquess and 24th Earl of Ormonde. In 1967, this Lord Ormonde sold the abandoned and deteriorating castle to the Castle Restoration Committee for a ceremonial £50, with the statement: "The people of Kilkenny, as well as myself and my family, feel a great pride in the Castle, and we have not liked to see this deterioration. We determined that it should not be allowed to fall into ruins. There are already too many ruins in Ireland." He also bought the land in front of the castle from the trustees "in order that it should never be built on and the castle would be seen in all its dignity and splendour". The handover ceremony also marked the foundation of The Butler Society,[5] a still thriving organisation that connects, preserves and unites a family once dominant in the British Isles. Mick Jagger and Marianne Faithfull turned up at the castle hand over party, with Jagger telling the newspapers "We just came to loon about." [6]

In the 17th century, the castle came into the hands of Elizabeth Preston, wife of then Lord Lieutenant of Ireland, another James Butler, also 12th Earl and 1st Duke of Ormonde. Butler, unlike most of his family, was a Protestant and throughout the Irish Confederate Wars of the 1640s was the representative of King Charles I in Ireland. However, his castle became the capital of a Roman Catholic rebel movement, the Irish Confederates, whose parliament or "Supreme Council" met in Kilkenny Castle from 1642-48. Ormonde himself was based in Dublin at this time. The east wall and the northeast tower of the Castle were damaged in 1650 during the siege of Kilkenny by Oliver Cromwell during the Cromwellian conquest of Ireland.

The damaged wall and tower were later torn down. Then, in 1661, Butler remodelled the castle as a “modern” château after his return from exile. A new entrance gateway in the south wall was built around this time.

During the Irish Civil War in 1922, Republicans were besieged in the Castle by Irish Free State forces. The Ormondes, together with their pet Pekinese, chose to remain in situ in their bedroom over the great gate, which was the main focus of attack. There was a machine gun outside their door. Only one man was injured but a great deal of damage was inflicted on the castle, which took many years to repair.[7]

The rest of the 20th century saw a large amount of restoration and maintenance take place, as well as the castle being opened to visitors.[8] The Butler Gallery, in the castle basement, holds rotating exhibitions put on by the Kilkenny Art Gallery Society in a venue named for Peggy and Hubert Butler.

There are ornamental gardens on the city side of the castle, and extensive land and gardens to the front. It has become one of the most visited tourist sites in Ireland. Now a property in state care. Part of the National Art Gallery is on display in the castle.

Excavations and building surveys by Ben Murtagh in the 1990s revealed traces of an earlier castle, exposed a postern gate (side entrance) and section of the castle ditch facing on to the Parade (now visible), and also partly uncovered the lost south-east side of the castle.

The entrance was through the (now missing) east wall. Various other features of the original castle have also been excavated, including original stone buttressing and a garderobe. Parts of this castle survive to the present day but the castle has changed over centuries. The south curtain wall is long gone, the elaborate entrance gate is a 17th-century addition, and in much of what can be seen from the castle park side is a 19th-century reconstruction.