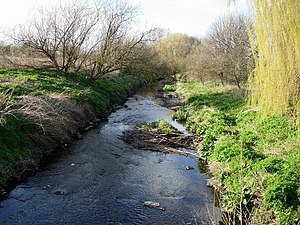 The Hogsmill near Chessington 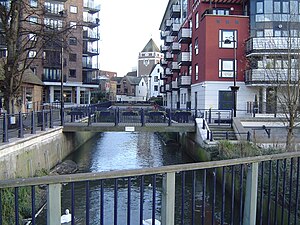 The Hogsmill at Kingston

The Hogsmill River flows through northern Surrey. It is a little river, six miles long, and one of the tributaries of the River Thames.

The Hogsmill rises in Ewell and flows into the Thames at Kingston upon Thames.

The Hogsmill's source is a chalk spring at or near TQ219627 in Ewell in Surrey. It flows in a northerly direction through Old Malden, New Malden and Berrylands to the River Thames close to the centre of Kingston upon Thames at TQ177691 after a course of 6 miles. The river has a catchment area of 28 square miles.

The main river flows through much low-lying land, the majority of which is given over to sports grounds, until the final section through the built-up area of Kingston. A local council maintains the Hogsmill Open Space which follows the river until the outskirts of Kingston.

In Kingston, the river passes through the middle of the town, south of the town centre. The ancient coronation stone of Anglo-Saxon kings stands today above the course of the river. Soon afterwards, the river falls into the Thames.

Its principal tributary is the Bonesgate Stream, three miles in length, which rises south of Chessington to join the Hogsmill at Tolworth Court Bridge. Its other tributaries are: 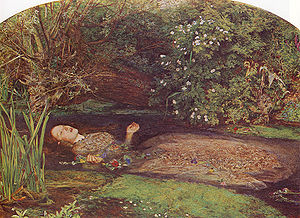 The Hogsmill has appeared in the art of Millais in his rendition of Ophelia;[1] though the play was set in Denmark and the model was painted while lying in a bath, the landscape was that of the Hogsmill River, near Ewell. Holman Hunt also used the Hogsmill in his work.[2]

The Hogsmill is known for watermills, reputed to have produced gunpowder for the Napoleonic Wars. Later, the waters were used to generate electricity for Ewell Court House[3]

William the Conqueror is said to have "watered his horse" in the source waters near today's Spring Hotel. Custom states this to be the pool at TQ218628. 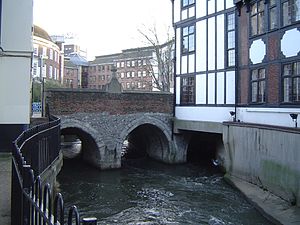 The Hogsmill flowing under Clattern Bridge in Kingston. The bridge is one of the oldest in Surrey, being mentioned in 1293 as "Clateryngbrugge"[4]