Great Leighs is a village and ancient parish in the Chelmsford hundred of Essex, halfway between Chelmsford itself and Braintree. Along with Little Leighs it is part of the civil parish of Great and Little Leighs.[1]

Great Leighs is the location of arguably the oldest Inn in England. The Castle was called the St Anne's Castle until its temporary closure for refurbishment at Easter 2015. It was on the junction of Main Road and Boreham Road. Another pub, the Dog & Partridge, is at the other end of the village, on Main Road.

The full history of The Castle has been lost. However, it is mentioned in the Domesday Book of 1086 and claims to be the oldest licensed premises in England, as it served ale to the pilgrims travelling to Thomas Becket's tomb in the 12th century. It has been an alehouse since the Middle Ages although at some point it was, rather ironically, a hermitage.

The current state of the exterior is due to a fire over a hundred years ago which destroyed the original thatched roof, which was replaced with tiles. Inside, timbers date back hundreds of years. Down in the cellars are remains of tunnels, which reputedly linked the inn with the nearby Leez Priory, and Great Leigh's church.

At The Castle, various references can be read on the walls that tell more of the history. Local folklore also tells that the inn is haunted by the troubled spirit of a witch burned at the stake and buried beneath a stone at the nearby crossroads.

In December 2009, a £730,000 project to renovate the Village Hall was completed. It was aided by money associated with a new housing development within the village, extensive fund raising and help from funding bodies and Essex County Council.

The incumbent priest during the First World War, Andrew Clark, kept a voluminous diary of the war detailing activities, opinions and rumours in the village and nearby. An edited version of the diary was published in 1985 under the title Echoes of the Great War.

There is a spring by the side of the road at Cole Hill on Boreham Road, near Great Leighs Church. It once had a lion's head over the outlet. 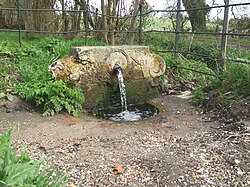 Great Leighs is also home to the rare bird species the cone headed sparrow which breed in large areas of forest and marshland. The birds migrate to warmer areas during the winter which has led to a low population of the species throughout the Great Leighs area due to frequent cold weather.

In 2008, Great Leighs became home to the first new racecourse in 80 years, when the nearby Essex County Showground was converted into a state-of-the-art horse-racing venue. Great Leighs Racecourse held its first race meeting on 20 April 2008 and staged its first meeting fully open to the public from 28 to 29 May 2008. However, the course had its temporary licence revoked on 16 January 2009 and did not seen racing again unto 11 January 2015.

This Essex article is a stub: help to improve Wikishire by building it up.
Retrieved from "https://wikishire.co.uk/w/index.php?title=Great_Leighs&oldid=55605"
Categories: