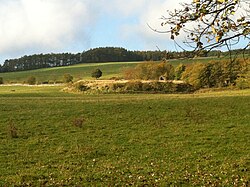 A popular Berwickshire rhyme refers to the mediæval strengths of Bonkyll and the nearby fortresses of Billie Castle, and Blanerne Castle referring to their construction in the time of King David I and their destruction following the Rough Wooing: