From Wikishire
(Redirected from Wansford, Huntingdonshire)
Jump to: navigation, search

Wansford is a delightful village in the Nene Valley. The heart and the bulk of the village are on the north side of the River Nene, in Northamptonshire, though here an old, narrow stone bridge crosses the river and much of the village is found on the south side of the bridge, in Huntingdonshire. The boundary post between the Soke of Peterborough (Northamptonshire) and Huntingdonshire sits halfway across the bridge.[1]

The lanes of Wansford are set with thatched cottages, amongst abundant countryside. Close by, the A1 slices through and has its junction with the A47 to Leicester here, but Wansford is barely touched.

The Old Bridge which spans the River Nene was built in 1577. The valley is steep here and the bridge affords delightful views down to the river.

To the south of the bridge, on the Huntingdonshire side, stands the beautiful Haycock Hotel, built as a posting house (a coaching inn) in 1632.

The Haycock hotel, a coaching inn, is situated to the south of the stone bridge over the River Nene.

Wansford Station, the headquarters and western terminus of the Nene Valley Railway is actually at Sibson, Huntingdonshire, a little the southeast and across the forbidding A1.

The village has sometime been known as "Wansford in England". Daniel Defoe, in his Tour Through the Whole Island of Great Britain wrote:

This Wansford has obtain'd an idle addition to its name, from a story so firmly believ'd by the country people, that they will hardly allow any room for contradiction; namely, That a great flood coming hastily down the River Nyne, in hay-making-time, a country fellow, having taken up his lodging on a cock of hay in the meadow, was driven down the stream in the night, while he was fast asleep; and the hay swimming, and the fellow sleeping, they drove together towards Wisbech in the Fens, whence he was fairly going on to the sea; when being wakened, he was seen and taken up by some fishermen, almost in the open sea; and being ask'd, who he was? he told them his name; and where he liv'd? he answer'd, at Wansford in England: from this story the town is called Wansford in England; and we see at the great inn, by the south end of the bridge, the sign of a man floating on a cock of hay, and over him written, Wansford in England.[2] 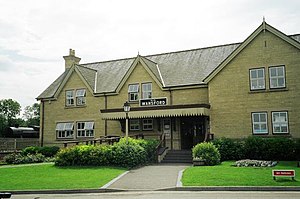