From Wikishire
(Redirected from Port Seton)
Jump to: navigation, search

The burgh of Cockenzie was created in 1591 by King James VI. Port Seton harbour was built by George Seton, 4th Earl of Winton between 1655 and 1665. The two are now indistinguishable and spoken of as one though by the joint name.

The town had a population of 4,493 as of 2001, though since that date there have been many new houses built. The population is now about 5,460. Cockenzie and Port Seton has continued to grow over the years and is now a dormitory town for Edinburgh.

To the west of the town, between Cockenzie and Prestonpans is the site of Cockenzie power station, a large coal-fired power station which has been a major employer since the 1960s, and has enabled the town to survive and prosper. 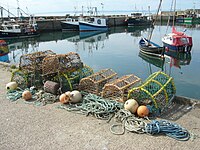 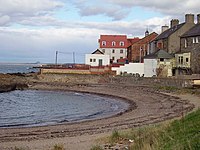 Cockenzie and Port Seton has grown from what were initially two small fishing villages. The older parts of the town, between the two harbours, retain a more traditional feel and look, similar to many other small fishing villages on the east coast of Scotland. Although the fishing industry has declined in recent years the harbour at Port Seton still retains a small fleet of vessels, mainly fishing for prawns. In the past Cockenzie was also involved in the salt making and coal mining industries.[1]

To the east of Port Seton there is a large caravan campsite/holiday park at Seton Sands. The promenade area and the creation of a coastal walk, a part of the John Muir Way, have improved the environment in recent years.[2]

To the south east is Seton Collegiate Church, a collegiate church also known as Seton Chapel, an Ancient Monument in the care of Historic Scotland. Next to it was Seton Palace, now Seton House.

The town is also home to the popular and active Cockenzie & Port Seton Amateur Radio Club (CPSARC) which draws members from the local area and across the country.