O'Hara's Battery is an artillery battery in the British overseas territory of Gibraltar. It is also the highest point of the territory, at the peak of the Rock of Gibraltar, 1,398 feet above sea level.

The battery is near the southern end of the Upper Rock Nature Reserve, in close proximity to Lord Airey's Battery.

The battery was constructed in 1890 at the former site of a watchtower that had earned the name O'Hara's Folly. The battery and tower were both named after the Governor of Gibraltar Charles O'Hara.

The first gun mounted on the battery was a 6-inch breech loading gun, which was replaced with a 9.2 inch Mark X BL gun in 1901. The battery was in use during Second World War and was last fired during training exercises in 1976. O'Hara's Battery has been refurbished and is open to the public. The battery and its associated works are listed with the Gibraltar Heritage Trust. 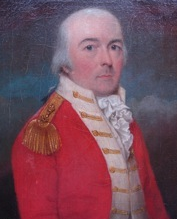 O'Hara's Battery is located near the southern end of the Upper Rock Nature Reserve, near Lord Airey's Battery, at the highest point of the Rock of Gibraltar, at 1,398 feet above sea level.[1][2][3] The emplacement is in the Upper Battery area, which also includes Lord Airey's Battery and Spur Battery, although the gun of the latter was removed in Project Vitello.[4][5] It is positioned at the southern terminus of O'Hara's Road, known as O'Hara's Point.[6]

The battery and road were named after the Governor of Gibraltar General Charles O'Hara (1740–1802). He served as governor from 1795 until his death in February 1802.[1][7] O'Hara was replaced as governor later that year by Prince Edward, the Duke of Kent, and future father of Queen Victoria.[8][9]

O'Hara had believed that if he were successful in constructing a watchtower on the highest point of the Rock, the Garrison would be able to observe the enemy at the Spanish port of Cadiz. While O'Hara's Tower was eventually built, it was not successful in its intended purpose and was nicknamed O'Hara's Folly. In 1888, the tower was scheduled for demolition. A bet ensued between the gunners of the Garrison and the officers of HMS Wasp. Ultimately, it was the men of the Wasp who brought down the tower with their sixth shot.[2][3] O'Hara's Folly was not the only nickname associated with the governor. O'Hara himself was frequently referred to as the Old Cock of the Rock. The handsome, flamboyant officer who wore the garb of an earlier era has been described as "the most perfect specimen I ever saw of the soldier and courtier of the last age." He was popular with the Garrison and lavished hospitality on even the humblest of guests. Although never married, O'Hara had at least two mistresses, and fathered four illegitimate children.[10][11][12]

The gun was exposed to the elements for more than three decades. In 1934, a steel shield was installed which afforded protection from small arms fire and splinters.[13] The battery continued in active use during Second World War.[18]

File:OHAR IWM archive 110302.webm O'Hara's Battery is one of four television broadcasting sites in Gibraltar; the others are at Signal Hill; the North Mole, Gibraltar Harbour; and Tower Blocks. In May 2012, the Gibraltar Regulatory Authority finalized a contract with United Kingdom-based Arqiva to establish digital broadcasting on the Rock. The new transmitters will operate from one location on the Upper Rock, replacing two of the existing sites: O'Hara's Battery and Signal Hill. Having the infrastructure at a single site is also expected to reduce the environmental impact.[20][21][22]

Map of the Upper Rock Nature Reserve. North is to the left.

O'Hara's Battery is one of three surviving 9.2 inch gun emplacements at the upper ridge of the Rock, the others being Lord Airey's Battery and Breakneck Battery, the latter on Ministry of Defence property.[27] O'Hara's Battery, including the 9.2 inch gun, magazine, engine room, and extra gun barrel, is listed with the Gibraltar Heritage Trust.[6]