From Wikishire
(Redirected from Naul, Dublin)
Jump to: navigation, search

Naul also known as "The Naul", is a village in County Dublin. The name also encompasses the townlands which surround the village: south as far as Hollywood Rath, and northward to the River Delvin beside the village, which marks the boundary between the counties of Dublin and Meath. The Naul is also a Catholic and a civil parish within the Hollywood Electoral Division. 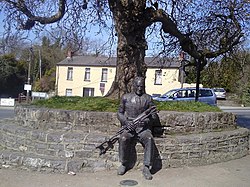 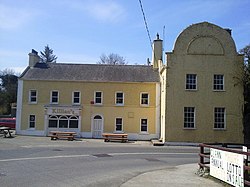 Killian's Bar in the village

The village is a crossroads between the R122 and R108 regional roads, the latter being the traditional route between Dublin and the port of Drogheda, while the R122 travels from Finglas in the south to Balbriggan.

The area is thought to have been occupied since the Stone Age as archaeological finds include numerous prehistoric earthworks, and the nearby megalithic] chambered cairns at Fourknocks on the Meath side of the village, discovered in 1949 on the lands of Thomas Connell. Four prehistoric tumuli were discovered. They contain a chamber wider than the one at Newgrange, and within the passage are strange stone engravings, indicating that the chambers were built about 4,000 years ago.[1]

There was also a "White Castle", of which nothing now remains. Built in the 13th century, it was the home of Richard Caddell, whose descendants were evicted by Cromwell's forces. The Caddell family were still around in the 19th century, indicated by a monument known locally as Caddell's Folly, erected for unknown reasons during the period by another Richard Caddell. The "White Castle" originally had inside stairs leading to the roof on which there was a powerful telescope. According to legend, Caddell watched the Bellewstown Races through the telescope, because he had had a disagreement with the race committee and vowed never to be seen in the area again.

The name is anglicised from the Irish An Aill meaning "The Cliff" as there is a substantial cliff on either side of the River Delvin just outside the village. Locally, the village is still known as The Naul as a throwback to the original Irish name, although this is not recognised officially.

The Séamus Ennis Cultural Centre was officially opened on 23 October 2001. It promotes and develops the traditional arts, and it organises and hosts regular recitals, music sessions, workshops and classes.

The idea for a cultural centre based on the achievements of Séamus Ennis had its origins in the Scoil Shéamuis Ennis, a festival held every October in the Naul area. It is a non-profit organisation set up to:

Clann Mhuíre CLG is the local Gaelic Athletic Association club. It was founded in 1957 and currently fields football teams from Under-8 to Under-18. There is an adult male football team that plays in Dublin AFL and a ladies football team.