From Wikishire
(Redirected from Fan Foel)
Jump to: navigation, search

Fan Brycheiniog is the highest peak in the Black Mountain region of the Brecon Beacons National Park. The summit stands in Brecknockshire.

The mountain is within the "Fforest Fawr Geopark" designated in 2005 in recognition of the area's geological heritage.[1]

The Beacons Way, a waymarked long distance footpath forks near the mountain, with one option passing over the summit and along the long ridge, and the other option offering a lowland route passing beside the lake Llyn y Fan Fawr to the east of the summit. This path leads to the mountain from Llanddeusant in the northwest and Glyntawe in the south-east.

In winter the mountain is spectacular and in summer provides great views.

North-west of the main summit is a slight rise called Fan Foel, which, at 2,562ft above sea level, is the highest point in the county of Carmarthen. 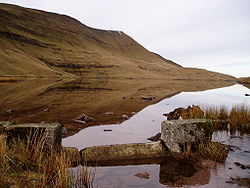 Summits of Fan Brycheiniog listed in Nuttall's tables are: