From Wikishire
(Redirected from Calton, Lanarkshire)
Jump to: navigation, search

Calton is an ancient parish in Lanarkshire that forms a district of Glasgow. It is situated north of the River Clyde, and just to the east of the city centre. Calton's most famous landmark is the Barras street market and the world-famous Barrowland Ballroom, one of Glasgow's principal musical venues. Originally spelled Caltoun, the area is universally known as The Calton by Glaswegians. 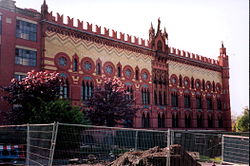 The former Templeton's Carpet Factory in the Calton, designed to resemble the Doge's Palace in Venice. Photo taken 2004.

The lands of Blackfaulds, on which Calton now stands, originally formed part of the lands of the Archbishopric of Glasgow, but were annexed to The Crown in 1587. In 1705 the owner, John Walkinshaw, began to feu the lands of Blackfaulds (part of the Barrowfield estate) on which the old village of Calton was built, and in 1817 a charter was granted, erecting Calton into a Burgh. During the area's time as an independent burgh, there were four Provosts of Calton:

The area became known for its weaving industry. On 30 June 1787, a meeting of Calton weavers was held on Glasgow Green. Their wages had dropped because of the increased importation of cheaper foreign textiles. Most of the workers decided to take strike action, although some accepted lower wages and carried on working. The dispute came to a head on 3 September 1787: when violence erupted after some striking weavers tried to seize materials from weavers who had carried on working.[1]

The military were called in and a detachment of the 39th Regiment of Foot opened fire on the demonstrators. Six of the men killed at the scene were locally called 'martyrs' and some of them were buried in the Calton Cemetery off the main London Road. The families of the men could not afford a headstone although, a century later, a memorial was raised to commemorate their actions.[1] 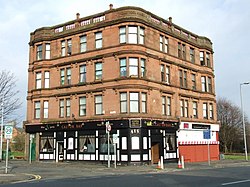 The Calton Bar on the London Road in 2008

Comedian Janey Godley, in her 2005 autobiography Handstands in the Dark,[2] wrote about the 14 years she spent running a Calton pub, the Weavers Inn. Her book details life there in the 1980s and 1990s, a time when the area became notorious for heroin abuse and when urban renewal began. The area is also notorious for street prostitution, being one of Glasgow's red light districts.

Calton is an area of considerable poverty and multiple deprivation regarding; "current income, employment, health, education, skills and training, housing, geographic access and crime."[3] In January 2006, a report into poverty in The Scotsman newspaper[4] stated that "a child born in Calton... is three times as likely to suffer heart disease, four times as likely to be hospitalised and ten times as likely to grow up in a workless household than a child in the city's prosperous western suburbs". Calton has the lowest male life expectancy in Scotland. A BBC news report on 13 February 2006 pointed out that, partially due to poor diet, crime, alcohol and drug abuse, life expectancy in Calton is lower than in some areas of Iraq or the Gaza Strip. A news report in the 21 January 2006 edition of The Guardian newspaper[5] gave the average lifespan of a person living in the Calton area as 53.9 years against a city average of 69 years and the Scottish average of 78. A 2008 World Health Organisation report contrasted Calton's male life expectancy, reported as standing at 54, with that of nearby Lenzie, Dunbartonshire, at 82.[6][7] Most of the affordable housing is owned by Housing Associations with a high percentage of tenants on housing benefit (For example, Thenue Housing Association has approximately 75% of tenants on housing benefit).