From Wikishire
(Redirected from Berwick-upon-Tweed Castle)
Jump to: navigation, search

Berwick Castle is a ruined castle in Berwick-upon-Tweed, in the northernmost reach of Northumberland.

The castle was founded in the 12th century by the Scottish King David I, which Berwick upon Tweed was a prospering burgh in his kingdom. In 1296-8, the English King Edward I had the castle rebuilt and the town fortified, before it was returned to Scotland. In November 1292, the Parliament of England met in the Great Hall at Berwick and here King Edward announced, before the parliament and many of the Nobility of Scotland, his adjudication of the dispute for the Crown of Scotland; John Baliol's claim was preferred to the rival claims of Robert the Bruce and the Count of Holland.

In 1330 "Domino Roberto de Lawedre" of The Bass, described as Custodian or Keeper of the Marches and the Castle of Berwick-upon-Tweed, received, apparently upon the termination of his employment there, £33.6s.8d, plus a similar amount, from the Scottish Exchequer.[1]

In 1464 the Exchequer Rolls of Scotland record that Robert Lauder of Edrington was paid £20 for repairs made to Berwick Castle. 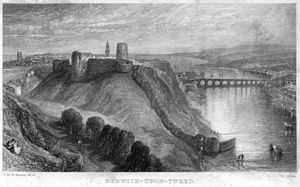 19th century depiction of the castle

The castle's location in the hotly disputed border country between England and Scotland made it one of the most important strongholds in the British Isles, and it enjoyed an eventful history. As a major tactical objective in the region, the castle was captured by both the English and Scots on a number of occasions and frequently sustained substantial damage; Edward I used it as his headquarters during the course of his invasions of Scotland. The castle also changed hands in less violent circumstances when the English King Richard I sold the castle to the Scots, to help fund the Third Crusade. The castle finally fell into English hands in the last week of August 1482. After invading Scotland following a pact with the Duke of Albany, Richard, Duke of Gloucester (later King Richard III) captured the castle from Patrick Hepburn, Lord Hailes. It was not to change hands again.

In the 16th century, during the reign of Elizabeth I, the walls were strengthened with the addition of two semi-circular artillery flanking towers, one at the river's edge and the other on the angle of the curtain wall.

Nevertheless, the construction of modern ramparts around Berwick in the sixteenth century rendered the castle obsolete. The union of the Crowns under King James VI of Scotland and I of England rendered the castle and the town defences redundant. The later history of the castle is therefore one of steady decline.

Large parts of the structure were simply used as a quarry (notably for the construction during the Commonwealth of the parish church, Holy Trinity, while in the nineteenth century, the Great Hall and much of what remained was demolished to make way for Berwick-upon-Tweed railway station. The railway platforms now stand where King Edward took oaths of allegiance from Scottish nobility in 1296, marked by a large notice to that effect.

The principal surviving part of the structure is the late thirteenth century White Wall and the steep and long flight of steps known as the Breakneck Stairs. It is now administered by English Heritage. 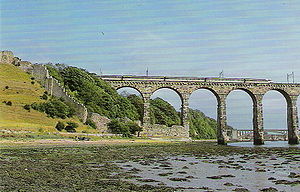 Remains of the Curtain Wall in front of the railway viaduct