From Wikishire
(Redirected from Bell Rock)
Jump to: navigation, search 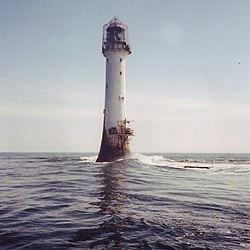 Inchcape or the Bell Rock is a reef about 11 miles off the east coast of Angus, near Dundee, between the coasts of Angus and Fife at 56°26’3"N, 2°23’14"W. It is occupied by the Bell Rock Lighthouse.

The name Inchcape comes from the Scottish Gaelic Innis Sgeap, meaning "Beehive Isle", probably comparing the shape of the reef to bee skeps. According to legend, possibly folk etymology, the alternative name Bell Rock derives from a 14th-century attempt by the abbot from Arbroath to install a warning bell on the reef. The bell was removed by a Dutch pirate who then perished a year later on the rocks, a story that is immortalised in Robert Southey's poem. The main hazard the reef presents to shipping is that only a relatively small proportion of it is above water, but a large section of the surrounding area is extremely shallow and dangerous.

The rock was featured in a one-hour episode of BBC's Seven Wonders of the Industrial World, which told the story of the Bell Rock Lighthouse's construction. Work began in 1807 and was largely completed by 1810.

The notoriety of the Inchcape rock is immortalized in Robert Southey's long, narrative poem "The Inchcape Rock", published 1820. It recounts the legend that the Abbot of Arbroath attached a warning bell to the rock:

The holy Abbot of Aberbrothok
Had placed that bell on the Inchcape Rock;
On a buoy in the storm it floated and swung,
And over the waves its warning rung.
When the Rock was hid by the surge’s swell,
The Mariners heard the warning Bell;
And then they knew the perilous Rock,
And blest the Abbot of Aberbrothok,

It then tells that the bell was cut from the rock in malice by a pirate, Ralph the Rover, and that the next year Ralph in these waters perished upon that very rock for want of the bell's warning.

Inchcape is formed of the same red sandstone seen in the nearby coastal areas, and of which Arbroath Abbey is built. The main body of the rock is about 427 feet long and 230 feet wide, but the southwestern part extends for another thousand feet or so. Robert Stevenson, the engineer who designed and built the lighthouse on the rock, estimated that the "greatest length, therefore, of the Bell Rock, which may be said to be dangerous to shipping, is about 1,427 feet, and its greatest breadth is about 300 feet.

"The Origins of the Rock: A treacherous Reef ...", Bellrock.org.uk, http://www.bellrock.org.uk/lighthouse/lighthouse_rock.htm, retrieved 16 October 2013