From Wikishire
(Redirected from Arbroath and St Vigeans)
Jump to: navigation, search

Arbroath is a royal burgh and the second largest town in the shire of Angus after Dundee, with a population of around 22,780. A busy fishing port, Arbroath stands on the North Sea coast, some 16 miles eastward of Dundee and 45 miles southward of Aberdeen. The ancient parish together with that of the nearby village of St Vigeans form a combined civil parish.

Arbroath's history as a town began in the High Middle Ages with the founding of Arbroath Abbey in 1178. Arbroath grew considerably during the industrial revolution owing to the expansion of the flax and jute industries and the engineering sector. A new harbour was built in 1839 and by the 1900s, Arbroath had become one of the larger fishing ports in Scotland.

The town is noted as the home of the Declaration of Arbroath, as well as the Arbroath Smokie.[1]

There is evidence for settlement of the area now occupied by the town that dates back to the Iron Age. The town, however, was founded in 1178 with the creation of Arbroath Abbey.

The earliest recorded name for the town was 'Aberbrothock', a reference to the Brothock Burn which runs through the town, the prefix 'Aber' coming from the Brythonic / Pictish 'Aber' meaning 'rivermouth'.[2] The name 'Aberbrothock' can be found in numerous spelling variations. Its earliest documented appearance is as 'Abirbrothoke', in the letter to Edward I confirming the Treaty of Salisbury, which agreed that the Queen regnant, Margaret, Maid of Norway would marry the Prince of Wales[3]) and 'Aberbrothok' (in the subsequent letter giving consent for the marriage[4]). In the Declaration of Arbroath, it is seen as 'Abirbrothoc'.[5] Early maps show a number of variants including Aberbrothock, Aberbrothik, Aberbrothick and Aberbrothwick and by the seventtenth century Arbroth and Aberbreth. The modern name, 'Arbroath', became more common in the mid-nineteenth century. 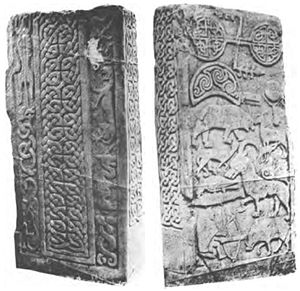 The area around Arbroath has been occupied since at least the Neolithic period. Material taken from postholes from an enclosure at Douglasmuir, near Friockheim, about 5 miles north of Arbroath have been radiocarbon dated to around 3500 BC. The function of the enclosure is unknown.[6] Bronze Age and Iron Age archaeology is to be found in abundance too,[7] the latter well represented by souterrains nearby Warddykes cemetery[8] and at West Grange of Conan,[9] and at Carlungie and Ardestie.

Pictish stone carvings have been found, often badly damaged, though the ninth century Drosten Stone (now in Forfar's museum) is one of the few Pictish artefacts with a Latin inscription: DROSTEN: IREUORET [E]TTFOR CUS.[10] 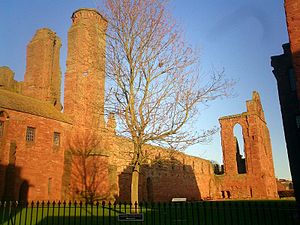 Arbroath Abbey was founded in 1178 by King William the Lion in 1178 for monks of the Tironensian order from Kelso Abbey and consecrated in 1197, dedicated to Thomas Becket. The King is buried in its grounds.[11] The King granted a burgh charter too. The original harbour was constructed and maintained by the abbot within the terms of an agreement between the burgesses and John Gedy, the abbot in AD 1394.[1]

On 6 April 1320 the Parliament of Scotland met at Arbroath Abbey and addressed a letter, the Declaration of Arbroath, to the Pope, affirming in eloquent terms the independence of the Scots.[5]

Arbroath was the location of the Battle of Arbroath in 1446, a private battle growing from a feud between the Chief Justiciary of Arbroath, Alexander Lindsay, third Earl of Crawford, and Bishop James Kennedy of St Andrews. Lindsay sacked and burnt the bishop's lands and properties and was excommunicated and dismissed from office. When the monks of Arbroath Abbey selected Alexander Ogilvy of Inverquharity as Lindsay's replacement, Lindsay led his men to Arbroath; a pitched battle in the town left 500 dead, including both Lindsay and Ogilvy. The Lindsays wasted large parts of the town in retaliation.[12]

The Abbey was dissolved at the Reformation and fell into decay, plundered for lead and stone. In 1815 the remains were taken into the care of the state for preservation and they are now administered by Historic Scotland.[1]

Arbroath's harbour was rebuilt in 1725[1] and enlarged and improved in 1839, when the sea wall, quay walls and breakwater were added to the old inner harbour, at a cost of £58,000.[13] Arbroath became a major port for the coastal shipping trade and in 1846, there were 89 Arbroath registered vessels, totalling 9100 gross tons. In the same year, 599 vessels docked at Arbroath, 56 from foreign ports, mainly from the Baltic trade, the remaining 543 employed on the coastal trade. Bark, flax, hemp, hides, oak, and fir timber, and guano for manure, groceries from London, and numerous articles of Baltic produce were imported via Arbroath, with sailcloth and other manufactured wares exported through Arbroath. 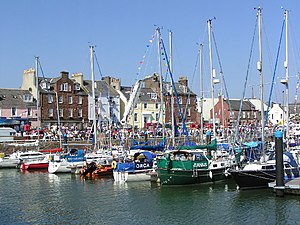 Arbroath sailcloth came into demand with the 1795 invention of linseed oil treatment of flaxen sails.,[14] developed in the late-1800s into waxed cotton, manufactured in Arbroath until manufacturing declined in the early 1970s.

During the industrial revolution, Arbroath's economy expanded and the population of the town expanded, with new housing having to be constructed to house the influx of workers. Arbroath became moderately well known for jute and sailcloth production, with 34 mills employing 1400 looms and producing over one million yards of osnaburg cloth and 450,000 yards of sailcloth in 1875.[15] In 1867, the mills in Arbroath employed 4620 people.[16]

Arbroath today is mostly known for fishing. When the harbour was enlarged in 1839 the local council sought fishermen from nearby towns and as far as Shetland to settle. The fishing industry grew and at its peak years between 1900 and 1980, around 40 vessels worked from Arbroath, with hundreds of men employed directly as fishermen, hundreds more employed ashore to service the fishing vessels and to process the fish. 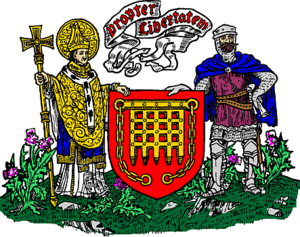 Arms of the Royal Burgh of Arbroath

Arbroath was made a royal burgh in 1178 by King William the Lion at the same time as the Abbey was established. The burgh of regality permitted the monks to hold a weekly market, dispense basic justice and to establish a harbour.

In 1559, the town's burgh of regality was reconfirmed in 1559 by King James VI. A provost and a town council were appointed and thereafter was Aberbrothock a fully fledged royal burgh.[1]

Arbroath is home to 45 Commando of the Royal Marines, who have been based at RM Condor since 1971. The barracks were originally built in 1940 and commissioned as RNAS Arbroath / HMS Condor, a Royal Naval Air Station (RNAS) until 1971. The Royal Marines moved to Arbroath in 1971 and remain a major contributor to the local economy. Around 600 residents are employed by the Ministry of Defence.

Tourism plays some part in the Arbroath economy:

Arbroath Smokies, for which Arbroath is well-known nationally and internationally, are made solely in Arbroath following the award of "Protected Geographical Indication" in 2004, which limits Arbroath Smokie production to within 2½ miles of Arbroath.

Smokies are made from haddock using traditional methods dating back to the late 1800s where the fish are first salted overnight to preserve them, before being left tied in pairs to dry. Next, the dried fish are hung in a special barrel containing a hardwood fire and covered with a lid. After around an hour of smoking, the fish are golden brown and ready to eat.[20] The preparation of Smokies remains a cottage industry in Arbroath, centred almost exclusively at the harbour area, though one larger processor, RR Spink, supplies Arbroath Smokies to several British supermarket chains, and to HM Queen Elizabeth II for which the company holds a Royal Warrant.[21][22]

Arbroath FC plays in the Third Division of the Scottish Football League and whose ground is at Gayfield Park. Arbroath FC holds the world record for the largest winning margin in a senior football match, 36-0, in the Scottish Cup match against Bon Accord FC (a scratch team from Aberdeen) on 12 September 1885.[23] Further goals were disallowed either for offside, or because it was not clear whether the ball had gone into the goal.,[24] for which reason the supporters' club is called the 36-0 club. Arbroath F.C. are nicknamed The Red Lichties, owing to the red light that used to guide fishing boats back from the North Sea to the harbour.

Arbroath also has a cricket club and a rugby union club.

Arbroath is also a popular location for Angling.