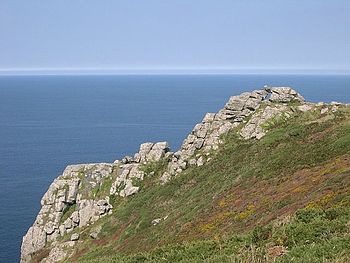 Zennor Head is a headland on coast of Cornwall facing the rolling Atlantic Ocean in the very west of the county, on the rough Penwith peninsula.

The headland is in the form of a promontory 2,460 feet long, between Pendour Cove and Porthzennor Cove, less than a mile northwest of the village of Zennor and a mile east of the next promontory, Gurnard's Head. The granite cliffs rise over 200 feet from the sea and the highest point of the headland is 314 feet above sea level, where an Ordnance Survey trig point stands.

Zennor Head was mined for copper and tin in the Victorian Era, and an abandoned mine was used as the target for a Second World War training exercise, Exercise Brandyball. There is no longer any residential or commercial occupancy on the headland, but it is displays nature in all its uncompromising beauty by its variety of coastal animals and plants.

Zenoor Head is said to be the largest coastal feature in the United Kingdom that begins with the letter "Z" (at least since Shetland ceased to be known as Zetland). It gets its name from the village of Zennor, which is named from a local saint, Senara. According to local legend, Senara was thrown off a headland in Brittany in a barrel after being falsely accused of adultery by her husband and washed up on the Cornish coast, founding Zennor, before continuing to Ireland.[1]

The headland is bordered by Cornish granite hedges, and the farming system dates from about 4000 BC, the time of the Bronze Age in Cornwall.[1] The surrounding area and village of Zennor has been continually occupied for over 4,000 years.[2] Zennor Head was mined extensively for copper and tin in the 19th century, and drainage adits remain visible on the eastern side.[2]

In 1943, the middle of Second World War, No. 4 British Commando were involved in a mock seaborne raid codenamed "Exercise Brandyball", which took place on the 300-foot cliffs of Zennor Head known as the 'Brandys'. The training exercise was deemed one of the most hazardous and challenging of the war,[3] beginning with a seaborne landing, followed by a climb up the vertical cliffs with full kit to destroy the target, an old disused tin mine. On the rehearsal day of 6 June, the weather was not good and one of the boats sank with the loss of two commandos. These events were filmed by Allied officers, as observers from all the services were present, including General Bernard Montgomery. The archives are now held in the Imperial War Museum. The following day the men decided the operation should continue, and it was successfully completed on 7 June.

The promontory was donated to the National Trust in December 1953.

The South West Coast Path, created in 1978, runs along the top of Zennor Head as part of its 630 miles, following the edge of the cliffs closely.[4]

In 2009 the headland suffered flooding which affected the cliff-top footpath.[5]

The promontory has been designated as part of the Penwith Heritage Coast.[6]

Zennor Head is located on the north coast of Cornwall, facing the Atlantic Ocean. A headland extending some 2,461 feet, it is surrounded by steep cliffs plunging into the sea below. It is west of the town of St Ives, and north-east of the town of Penzance. The nearest village is Zennor, and the headland is flanked by two coves, Pendour and Porthzennor.

Access is from the South West Coast Path, or the B3306 road (West Cornwall coast road).[2] There is a deep inlet known as Horseback Zawn on the western side, where seabirds nest.[2] The headland is topped by an Ordnance Survey "Trig Point".

The Killas strata, which is exposed over the majority of Zennor Head, is a sedimentary rock formation[7] laid down in the Devonian Era, between approximately 415 and 375 million years ago. Zennor Head is on the surface boundary of the so-called "Land's End Granite", part of the Cornubian batholith which dates from 279 to 274 myr.[2] However, the intrusion of the granite into the Killas strata altered it metamorphically into a shale-type rock.[2] 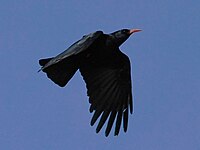 Zennor Head is home to a variety of wildlife, including the re-introduced Cornish Choughs (Pyrrhocorax pyrrhocorax pyrrhocorax). Grey seals (Halichoerus grypus) have been sighted off the coast.[8] Many seabirds nest on the cliffs, especially around Horseback Zawn, including herring gulls and fulmars. Kestrels hunt inland of the shoreline.[2]

The headland is primarily covered with grass, as well as heather, bracken, thyme and gorse.[2][9] In 1962, specimens of the comparatively rare Western Clover (Trifolium occidentale) were found on Zennor Head.[10] The lichen Dirina massiliensis has also been found high on the acid schist cliffs on the north-, seaward-side of the headland.[11] The parasitic plant dodder (Cuscuta x.) is also found amongst the other plants.[2] There are also typical coastal flowering plants such as Kidney vetch (Anthyllis vulneraria), Sea Campion (Silene x.), and thrift (Armeria maritima).[2]