Woodmancote is a village in Gloucestershire, immediately east of Bishop's Cleeve, and the two villages run into each other. The two villages are about three and a half miles north of Cheltenham.

The name of the village is from the Old English for 'woodmen's cottage': Wudumannacote. It is one of three villages of the same name in Gloucestershire.

In the south-east of the parish is the small village of Cleeve Hill, under the slopes of the hill of the same name: Cleeve Hill.

The Domesday Book of 1086 does not include Woodmancote. It became a place in its own right when estates in the area were organised by the Bishop's officers around 1170.[1]

Over centuries Woodmancote remained an area of smallholdings and arable fields.[2] Only in 1847 the traditional farming of the villagers on mediæval open-fields ended, as arable land became enclosed into the fields we see today.[3] For 600 years Bishop's Cleeve and Woodmancote have been hard to define as two separate parishes. This was because both were "in the same manor of the Bishop of Worcester and so it is often impossible to distinguish in his records".[3] The Black Death saw one third of the population of Bishop's Cleeve and Woodmancote die.[3]

In the 1870s, Woodmancote was described by John Marius Wilson's Imperial Gazetteer of England and Wales as:

The main road running through Woodmancote is called Station Road as it led to Bishop's Cleeve railway station. This road leads straight into Bishop's Cleeve to the west and Cheltenham to the south. From there, the M5 is easily accessible.

Woodmancote and Bishop's Cleeve were once served by a railway line that divides the two parishes. It was created on 1 June 1906 by the Great Western Railway which ran from Stratford-upon-Avon and finished at Cheltenham. The railway station closed on 7 March 1960 and was demolished.

A 12-mile stretch of the track has been reconstructed through Woodmancote which has been reopened and is now preserved as heritage of the Gloucestershire Warwickshire Railway.[2]

Woodmancote's development has been stunted because of where it is located: its position at the foot of Cleeve Hill gives the settlement only a westerly direction to expand, but only to an extent before it reaches the boundary of Bishop's Cleeve. 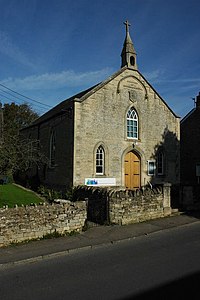 The village is the home of the Woodmancote Evangelical Free Church, part of the Countess of Huntingdon's Connexion.[5]