Woodhurst is a village in Huntingdonshire, near Oldhurst. Its closest town is St Ives to the south. It is famed for the view of the village from the west. 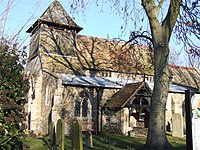