Difference between revisions of "Woodford, Wiltshire" 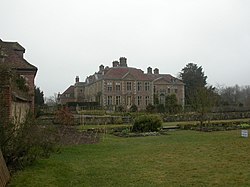 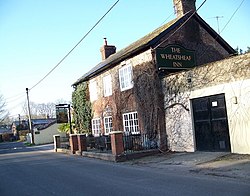 Woodford is a parish in southern-central Wiltshire, on the west bank of the Salisbury Avon, about four miles north of Salisbury. Its settlements are the villages of Lower Woodford, Middle Woodford and Upper Woodford,[2] the last of which is the largest of the three. In 1871, the population was 523;[2] in 1951, this had decreased to 405 people.[3]

In 972, the name was recorded as Wuduforda, which in Old English means "ford in or by a wood", from wudu + ford.[4] In the nineteenth century it was pronounced 'oodford.[5]

Woodford is mentioned in the days of Henry III, namely there being a knight, Sir William Woodford of Woodford.[6] A palace existed here, used by the Bishops of Salisbury, but only a few carved stones remain on the site;[2] the palace was the hiding place of Charles II after the Battle of Worcester in September 1651.[7] The buildings of Druid's Lodge (also known as Woodford Hut),[8] in the north-west of the parish, were used as a prisoner-of-war camp during the Second World War, but they no longer exist.[3] Nearby there is a small stone shelter, erected as a memorial to Lieutenant Colonel F. G. G. Bailey (d. 1951), who resided at Lake House, Wilsford.[3] Woodford Church of England Primary School was erected between 1833 and 1836, and increased in size in 1854.[3] In 1880 the chief landowners were Ecclesiastical Commissioners, and Robert Loder.[2]

Woodford is approximately 2,780 acres in size. On a hill slope south-west of Druid's Head, there is a large and old enclosure that was formed by a bank.[8]

Lower Woodford Water Meadows is a 59-acre biological Site of Special Scientific Interest in Lower Woodford, notified in 1971. Of the working water-meadows in southern England that are associated with chalk streams, the best is situated at Lower Woodford.[9]

Heale House, near Middle Woodford, is Grade I listed[10] and is an example of Georgian architecture that dates to around 1730; it is surrounded by notable gardens.[11][12] Additions were made to the house in 1894 by Detmar Blow.[13]

The Church of England parish church of All Saints at Middle Woodford is Grade II listed.[14] It has 12th-century origins but was much restored in 1845 by T.H. Wyatt. A monument to Gerard Erington of Heale is dated 1596.[15]

At Lower Woodford, the 17th-century Manor House is Grade II listed.[16] Avon Cottage, a timber-framed house originally built in the 15th century, was recased in red brick in the late 18th or early 19th century, with 20th-century additions to the south and east.[3] The collar-beam roof was reconstructed in the late 16th or early 17th century when a ceiling was added in the hall.[3]The Court House, on the eastern side of the road, was part of Woodford Manor estate until 1920 when it was sold to Major General Aston.[3]

Woodford Valley C.E. Primary Academy serves the villages and surrounding parishes.[17] The site began as a National school in 1872.[18]

There are two pubs: the Bridge Inn at Upper Woodford and the Wheatsheaf Inn at Lower Woodford.