Wood Green is a town in Middlesex within the metropolitan conurbation. It is seven miles north of Charing Cross, and is west of Tottenham, south of Palmers Green and north of Harringay. The London Plan identifies the town as one of the metropolitan centres in Greater London.[1]

In the latter half of the 19th century and before urbanisation, Wood Green was a rural part of the parish of Tottenham and covered by woodland called Tottenham Wood: hence the original name of the area, Tottenham Wood Green. The 18-acre area was auctioned off as 'Wood-Green' in 9 separate plots on 13 August 1806 by local agent Prickett and Ellis at Garraway's Coffee house in Cornhill, London.

Wood Green is a busy urban centre with a sizeable shopping area with two cinemas, bars, nightclubs, numerous restaurants and cafes and a shopping area, The Mall, close to the tube station. The High Road, the main shopping spine, is part of Green Lanes and stretches from the Wood Green tube station to the next stop on the Piccadilly line, Turnpike Lane, and is lined with shops along its route.

The Chocolate Factory was set up by Haringey Arts Council in 1996 to develop artists' studios, and now has a second building. The project houses 200 local artists, music, film and multi media studios, photographic studios, and several performing arts organisations.[2]

The nearby Alexandra Palace played a leading role in the development of public service television in the UK. Wood Green also played its part in the history of commercial television.

In November 1936, the BBC opened its TV service at Alexandra Palace. In 1955, with the opening of Lew Grade's London weekend franchise Associated Television (ATV), The Wood Green Empire in Lymington Avenue was home to variety programmes on Independent Television (ITV); one of which was The Arthur Haynes Show, starring the host himself and his straight man Nicholas Parsons.

Only the frontage of The Wood Green Empire survives, it is now a branch of the Halifax bank, and all that is left of the BBC TV at Alexandra Palace is the familiar TV mast. The ATV operations moved to Elstree and Borehamwood (now BBC studios) and the BBC News department, which was the only unit remaining at 'Ally Pally' after BBC Television Centre was opened in the 1950s, moved to White City, west London in September 1969. The Alexandra Palace was then used for the production of joint BBC/Open University programmes for a while, but all OU programmes are now produced in Milton Keynes where the OU's headquarters are located. 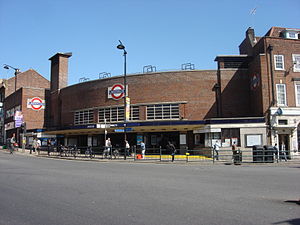 Alexandra Palace, formerly known as "Wood Green for Alexandra Park", is on the East Coast Main Line. It has services in to Kings Cross and Moorgate and out to Hertford and Welwyn Garden City. Bowes Park serves the Hertford Loop branch of the East Coast Main Line. Until the 1960s, a branch line of the former Great Eastern Railway network crossed the Wood Green High Road at a station called Noel Park; providing connections to Stratford and North Woolwich.