Wolverhampton is a city in south-west Staffordshire. It lies north-west of its larger near-neighbour Birmingham at the edge of the large conurbation formed by the two cities, the Black Country towns and Solihull.

The city is commonly recognised as being named after Lady Wulfrun, who founded the town in 985, its name coming from the Old English Wulfruneheantun = "Wulfrun's high (principal) estate or town".[1] Alternatively, the city may have earned its original name from Wulfereēantūn = "Wulfhere's high estate" after the Mercian King.[2] Nevertheless, the name Wulfrun is commonly used in the city – for example, for the Wulfrun Centre or for Wulfrun Hall.

The city grew initially as a market town with specialism within the woollen trade. During and after the Industrial Revolution, the city became a major industrial centre, with mining (mostly coal, limestone and iron ore) as well as production of steel, japanning, locks, motorcycles and cars – including the first vehicle to hold the land speed record at over 200 mph. Today, the major industries within the city are both engineering based (including a large aerospace industry) and within the service sector.[3]

The geology of the city is complex, with a combination of Triassic and Carboniferous geology, and Upper and Middle coal measures. There is also an area of dolerite deposits, which fed the town's industrial development.[4]

A local tradition states that King Wulfhere of Mercia founded an abbey of St Mary at Wolverhampton in 659 but no evidence has been found.[5] 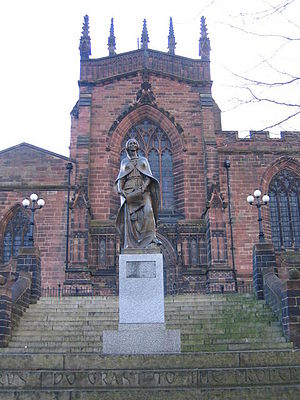 In 910 a decisive battle toolk place nearby at Tettenhall or Wednesfield in which the English routed the Danes. In 985, King Æthelred II granted lands at a place referred to as Heantun to Lady Wulfrun by royal charter,[6] thus founding the settlement. In 994, a monastery was consecrated in Wolverhampton for which Wulfrun granted land at Upper Arley, Bilston, Willenhall, Wednesfield, Pelsall, Ogley Hay near Brownhills, Hilton near Wall, Hatherton, Kinvaston, Hilton near Wolverhampton, and Featherstone.[6] This became the site for the current St Peter's Church.[7] A statue of Lady Wulfrun, sculpted by Sir Charles Wheeler, can be seen on the stairs outside the church.[6]

In 1179, there is mention of a market held in the town, and in 1204 it had come to the attention of King John that the town did not possess a Royal Charter for holding a market. This charter for a weekly market held on a Wednesday was eventually granted on 4 February 1258 by Henry III.[7]

St Peter's Church was built in the 13th century. It was extended and refurbished from the 15th century.[8] It remains the oldest building in Wolverhampton.

It is held that in the 14th and 15th centuries that Wolverhampton was one of the "staple towns" of the woollen trade,[7] which today can be seen by the inclusion of a woolpack on the city's coat of arms and by the many small streets, especially in the city centre, called "Fold" (examples being Blossom's Fold, Farmers Fold, Townwell Fold and Victoria Fold), as well as Woolpack Street and Woolpack Alley.[7]

In 1512, Sir Stephen Jenyns, a former Lord Mayor of London, founded Wolverhampton Grammar School, one of the oldest extant schools in Britain.[9]

Wolverhampton suffered two Great Fires: the first in April 1590, and the second in September 1696. Both fires started in today's Salop Street. The first fire lasted for five days and left nearly 700 people homeless, whilst the second destroyed 60 homes in the first five hours. This second fire led to the purchase of the first fire engine within the city in September 1703.[7]

From the 16th century onwards, Wolverhampton became home to a number of metal industries including lock and key making and iron and brass working.

In January 1606, two farmers, Thomas Smart and John Holyhead of Rowley Regis, were hanged in High Green, now Queen Square, for sheltering some of the Gunpowder Plotters who had fled to the Midlands. The pair played no part in the original plot but nevertheless suffered the traitor's death of being drawn, hanged and quartered on butcher's blocks set up in the square a few days before the execution of Guy Fawkes and several other plotters in London.[7]

Wolverhampton grew wealthy in the Victorian age from heavy industry drawn by the abundance of coal and iron deposits in the area. The remains of this wealth can be seen in local houses such as Wightwick Manor and The Mount (both built for the Mander family, prominent varnish and paint manufacturers), and Tettenhall Towers. Many other houses of similar stature were built only to be demolished in the 1960s and 1970s.

In the 19th century the city saw much immigration from Wales and Ireland, following the Irish Potato Famine. Wolverhampton is home to a large proportion of the Sikh community, who settled there during the period (1940–1970) from the Punjab. Today, Sikhs make up some 8% of the city's population. 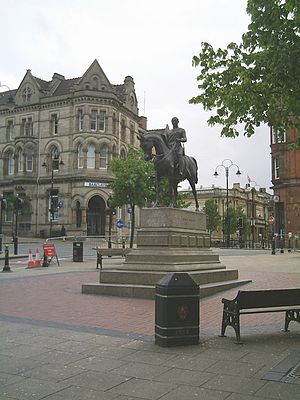 The Reform Act 1832 gave Wolverhampton 2 Members of Parliament. A “municipal borough” was founded in 1848 and a “county borough” in 1889.[10] In 2001 the borough of Wolverhampton received letters patent erecting it to the status of a city (one of three "Millennium Cities".[11]

The railway reached Wolverhampton in 1837, the first station located at Wednesfield Heath (now Heath Town. Wolverhampton Railway Works was established in 1849 for the Shrewsbury and Birmingham Railway, the Northern Division workshop of the Great Western Railway from 1854.[12]

In 1866, a statue was erected in memory of Prince Albert, unveiled by Queen Victoria; the Queen’s first public appearance since Prince Albert’s funeral. A 40-foot archway made of coal was constructed for the visit. The Queen was so pleased with the statue that she knighted the then-mayor, an industrialist named John Morris. High Green was renamed Queen Square in honour of the visit.

Railways expanded in Wolverhampton and trolleybuses appeared in 1923 and in 1930; for a brief period, Wolverhampton was the world's largest trolleybus system. As cars multiplied, the town got Britain’s first set of traffic lights at Princes Square in 1927.[13]

Politics in Wolverhampton has tended to be more Liberal that in the Black Country towns. Here in 1918, David Lloyd George announced the calling of a General Election at "The Mount"[14], and he made his "Homes fit for heroes" speech at Wolverhampton Grand Theatre the same year.[15] In April 1968 a private speech given by Enoch Powell in the town became widely, which became known as the "Rivers of Blood speech" in which he warned of massive civil unrest if mass immigration of black and Asian commonwealth inhabitants continued. The speech and the reaction to it propelled Enoch Powell out of the Cabinet and out of top-level politics for the rest of his career, and shaped, or cowed, political discussion on such subjects for a generation.

Many of the city centre's buildings date from the early 20th century and before, the oldest buildings being St Peter's Church (he 13th century) and a framed timber 17th century building on Victoria Street which is now one of just two remaining in the area which was heavily populated by them until the turn of the 20th century. This building was originally a residential property, but later became the Hand Inn public house. It was completely restored in 1981 after a two-year refurbishment project and has been used by various businesses since then – currently as a second hand book shop.

In 1960, plans were announced to build a ring road around the centre of Wolverhampton. By the end of the 1960s, more than half of the ring road had been completed, stretching from Snow Hill to Stafford Street (via Penn Road, Chapel Ash and Waterloo Road), followed a few years later by a section between Snow Hill and Bilston Street. However, the final section between Bilston Street and Stafford Street (via Wednesfield Road) was not completed until 1986.

The centre of Wolverhampton has been altered radically since the mid 1960s; with the Mander Centre being opened in two phases, the first in 1968 and the second in 1971. Several refurbishments have taken place since. The Wulfrun Centre, an open shopping area, was opened alongside the Mander Centre's first phase in 1968, but has been undercover since a roof was added in the late 1990s.[16]

From the 18th century, Wolverhampton was well known for production of the japanned ware and steel jewellery. The renowned 18th and 19th century artists Joseph Barney (1753–1832), Edward Bird (1772–1819), George Wallis (1811–1891) were all born in Wolverhampton and initially trained as japanned ware painters.

Wolverhampton Art Gallery was established in 1884.

The School of Practical Art was opened in 1850s and eventually became a close associate of the Art Gallery. Among its students and teachers were Robert Jackson Emerson (1878–1944), Sir Charles Wheeler (Emerson's most famous pupil and the sculptor of the fountains in Trafalgar Square), Sara Page who established her studio in Paris, and many other artists and sculptors recognized locally and nationally.

Wolverhampton Grand Theatre was opened in 1894. 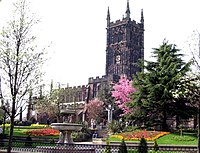 St Peter's Collegiate Church is located at the highest point within the city centre,[17] and is the leading church of the Parish of Central Wolverhampton.[18] The Grade I listed building, much of which dates from the 15th century, is of significant architectural and historical interest; and is the seat of the Bishop of Wolverhampton. The earliest part of the church dates from 1205. The former grounds of the church (known as St Peter's Gardens) contain several artifacts: the Horsman Fountain, the Harris Memorial, an Anglo-Saxon Pillar and Bargaining Stone.

The Horsman Fountain dates from 1896, and commemorates Philip Horsman, a local businessman who founded Wolverhampton Art Gallery, and the Wolverhampton & Staffordshire Eye Infirmary.

The Harris Memorial commemorates a wireless operator in the First World War who, whilst posted to an Italian ship, continued to send messages whilst under heavy fire until he was killed by shrapnel on 15 May 1917.[19]

The Church of St John in the Square is located on the southern side of the city centre, and is a Grade II* listed building. It opened in 1760, although it was only given its own parish in 1847.[20] It contains a Renatus Harris organ, of which there is a local tradition that it was played by Handel during the first performance of Messiah, before its installation in the church.[21] The church was endowed by Sir Samuel Hellier,[22] guardian of the Hellier Stradivarius and known to scholars of the organ.[23] 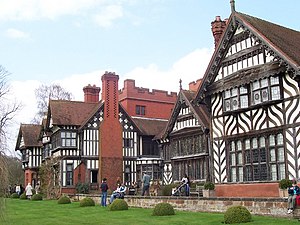 Wightwick Manor is a |Victorian manor house located on Wightwick Bank on the western side of the city and one of only a few surviving examples of a house built and furnished under the influence of the Arts and Crafts movement.[24] Wightwick Manor was built by Theodore Mander, of the Mander family, who were successful 19th-century industrialists in the area, and his wife Flora, daughter of Henry Nicholas Paint, member of Parliament in Canada. It was designed by Edward Ould of Liverpool in two phases; the first was completed in 1887 and the house was extended with the Great Parlour wing in 1893.[24] It is a Grade I listed building. The nearby Old Malhouse is a Grade II listed building.

The Molineux Hotel is a former mansion house originally known as Molineux House, which later served as an hotel and is planned to be the home of the city's archive service in March 2009. It is a Grade II* listed building, and stands in the city centre. It was constructed in about 1720, with extensions throughout the 18th and 19th centuries. In 1860 the grounds were opened to the public as Wolverhampton's first public park, whilst several years later the park was leased out to Wolverhampton Wanderers FC, for the Molineux Stadium. The hotel was closed in 1979, and restoration work started in 2005.[25]

The Statue of Prince Albert that stands in Queen Square was erected in 1866, and is one of the most recognised landmarks within the city. It is colloqually known as "The Man on the Horse", and was unveiled by Queen Victoria, on what is reputed to be her first public engagement after the funeral of Prince Albert.[26]