Wild Boar Fell is fell on Mallerstang Common, part of the Pennines on the eastern edge of Westmorland. At 2,323 feet, it is just a yard short of High Seat on the county border to the west and one of the highest of the fells in this section of the Pennines.

The nearest rival summits are Swarth Fell which is a mile-long ridge to the south, at SD754965 and to the east, on the opposite side of the narrow dale of Mallerstang, are High Seat and Hugh Seat.

The fell apparently gets its name from the wild boar which inhabited the area over 500 years ago.[1] In this area, which received many Norse settlers in the Viking Age, most of the fells have retained Norse names, but if there was a distinct Viking name it has gone, though the names of many of its features, such as The Nab and Dolphinsty, are of Norse origin.

In earlier times, probably up to the mid nineteenth century, the Millstone Grit, or gritstone, which forms the flat top of the fell, was used for making millstones. Some partly formed millstones can be seen on the eastern flank of the fell - and also on the corresponding western flank of Mallerstang Edge on the opposite side of the dale. Sand (composed of Millstone Grit) from the beach of Sand Tarn was used by local people to sharpen knives and scythes; they made "strickles" by sticking the sand to wooden blocks with tar.

A tusk, claimed to be of "the last wild boar caught on the fell", is kept in Kirkby Stephen parish church.

During Second World War Wild Boar Fell was used by the Army at Warcop Training Area for training tank crews to operate in difficult terrain.

Wild Boar Fell is a dramatic sight and a landmark for many miles around. Approached from the north it gives the misleading impression that it is a peak, but from the south of the dale at Aisgill its true profile is seen, not dissimilar to Ingleborough, with steep sides and a flat top (consisting of a cap of millstone grit).

The classic route for walking up Wild Boar is via the bridleway from Hazelgill Farm, ascending west to High Dophinsty before following Scriddles ridge top to Blackbed Scar. Once there you are on Wild Boar Fell's table top plateau, a rather boggy expanse. The summit is marked by a trig point and Sand Tarn] is about 350 yards to the west, just below the summit.

The views from the top make a spectacular panorama. The Howgills, Pennines, the Lake District fells, the Yorkshire Three Peaks can all be seen and, on a clear day, there is even a glimpse of the sea at Morecambe Bay.

A common feature of many Pennine dales and Lake District fells are the groups of cairns on the high ground. There is a fine cluster of "stone men" on The Nab of Wild Boar Fell - and a smaller group on subsidiary peak, Little Fell (1,834 feet) at NY766008, a mile to the north. There seems little agreement on when, why, or by which people such cairns were built. One common suggestion, that they were built by shepherds as markers for paths, may explain some of the cruder "piles of stones"; but groups like those on The Nab surely need a more convincing explanation. 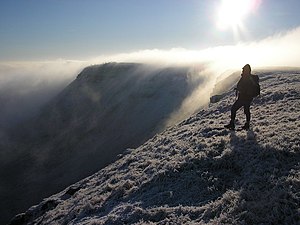