The County of Wigtown is a shire in the south-western corner of Scotland. Wigtownshire is also known as West Galloway, Galloway being formed by Wigtownshire and neighbouring Kirkcudbrightshire together.

Wigtownshire is a small county, somewhat triangular in shape and surrounded by sea on two sides. The North Channel lies to the west of Wigtownshire separating it from Ulster, between the Atlantic Ocean and the Irish Sea. On the southeast the county is along the shore of Luce Bay To the north is Ayrshire. To the east is Kirkcudbrightshire, divided from Wigtownshire by the River Cree which enters to sea in the great gulf of Wigtown Bay, between which and Luce Bay, farther west, extends the promontory of the Machars.

The seas are warmed by the Gulf stream and the long coastlines bring a mild climate. Dolphins and basking sharks are frequently seen in the waters offshore.

The county town is Wigtown, though the largest town of Wigtownshire is the port town of Stranraer.

Wigtownshire includes the southernmost point in Scotland, the Mull of Galloway. In its narrow confines the shire contains a variety of landscape, such as the Machars in the south and the high, distinctive hammerhead peninsula at the west, the Rhinns of Galloway. The north of the county trespasses into the Southern Uplands.

The Rhinns of Galloway

The Rhinns or Rhins are a hilly ridge running almost north-south and joined to the main body of the county in their midst. The rounded northern headland ends at Milleur Point and the southern headland is the Mull of Galloway, Scotland's southernmost point. Between the Rhinns and the main body of the county are two bays; Luce Bay a broad expanse to the south and more enclosed Loch Ryan to the north, at the head of which is Stranraer and further north Cairnryan, two ferry ports taking advantage of the shelter of the loch.

Torrs Warren, on the coast of the Machars

The Machars are the great triangular peninsula between Wigtown Bay and Luce Bay. This land has a Gaelic name: "the Plains". It has no notable hills but is a gently rolling landscape enjoying, from being bathed in the sea-warmed air, a mild climate.

At the end of this promontory is the Isle of Whithorn, the first place from which Christianity began to spread in Caledonia, seat first of an Irish mission station then an English abbey then a Gallowegian and Scottish bishopric.

The county's south coast is one of great bays and small inlets. Wigtown Bay is a large bight formed of the estuary of the modest River Cree and that of the Water of Fleet, and is divided between Kirkcudbrightshire and Wigtownshire. Its edge is formed by the Machar projecting into the sea beyond which is Luce Bay.

The more or less rugged coast has many small inlets, few of which, owing to hidden rocks, afford secure landing-places. Excepting Loch Ryan, a fine natural harbour of which Stranraer is the port, and Cairnryan, built later, the harbours are not available for vessels of heavy burden, on account either of the great distance to which the sea retires, or of their exposure to frequent fierce gales.

Much of the county has a wild, bleak appearance, the higher land being covered with heath and whins, while in the lower districts there are long stretches of bog and moss, and in the north centre, a few miles west of Newton Stewart, is a tract known as the Moors.

Only towards the Ayrshire border do the hills reach a considerable altitude, Benbrake and Craigairie Fell being each about 1,000 feet in height and of these, Craigairie Fell at 1,056 feet is the county top.

The chief rivers are:

There are many lochs, but all small. Several are enclosed in private estates. Among the larger lakes are Loch Maberry and Loch Dornal, both partly in Ayrshire, Loch Ochiltree in the north of the shire, Loch Connell in the west, Loch Ronald in the centre and the group of Castle Loch and four others in the parish of Mochrum, towards the south, and Loch Dowalton, at the junction of Kirkinner, Sorbie and Glasserton parishes.

Major road links to the area comprise the A77 to the north towards Ayr, and the A75 to the east along the Solway coast.

There are several peat-covered areas in the county.

In the lands of Galloway, Ptolemy identified the Novantae tribe, whom the Romans found here when Agricola advanced in 79 AD. From this period dates a defensive ditch and rampart, the Deil's Dyke, protecting the local folk from the northern and southern Picts, the line of which has been traced in a north-easterly direction from Beoch on the eastern side of Loch Ryan to a spot on the River Nith near Thornhill, a distance of 50 miles. Hill forts, cairns, standing stones, hut circles and crannogs or lake dwellings (several of which were exposed when Dowalton Loch near Sorbie and Barhapple Loch near Glenluce were drained) have been found in Wigtownshire and earlier artefacts too: canoes and flint, stone and bronze implements.

Agricola invaded the north in 79 AD and a small Romans camp has been found at Rispain near Whithorn, and a station hereabouts named Rerigonium has been identified with Innermessan on the eastern shore of Loch Ryan, but so few remains exist that it has been concluded the Romans effected no permanent occupation in Wigtownshire.

In 396, Ninian, the first Christian missionary to Scotland, landed at Isle of Whithorn to convert the natives. His efforts were temporarily successful, but soon after his death (432) the people relapsed into paganism, excepting a faithful remnant who continued to carry on Christian work. A monastery was built at Whithorn. In the 6th century these lands fell under the Kingdom of the Northumbrians, in which time Whithorn thrived; Bede describes in The Ecclesiastical History of the English People, naming it Candida Casa, which in the English of the day would be Hwitærn, suggesting a continuity of use of the English language in West Galloway from the Dark Ages. A bishopric was briefly founded at Whithorn in the 8th century. When Northumbria was smashed by the Norse, Galloway too fell, and in time the Norse-Irish Gallgaidhel, or "stranger Gaels" landed on these coasts, giving the name of Galloway. In the 12th century by Fergus, King of Galloway made Whithorn a bishop's seat once more, and it remained the seat of the Bishop of Galloway until the Reformation

With the aid of the Norsemen and the men of Galloway, Kenneth Macalpine defeated the northern Picts at Forteviot and was crowned King of Alba at Scone in 844, uniting the two kingdoms of the Scots and Picts, and creating the new power in the north, which though Galloway resisted for some centuries under its own kings, was to absorb these lands. 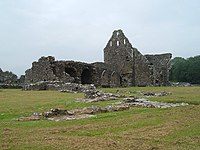 About 1150 a local revolt against the intrusion of Anglo-Norman lords was routed at Causeway End near the estuary of the Cree. In 1190 Roland, Lord of Galloway, built for Cistercians from Melrose the fine abbey of Glenluce, of which the only remains are the foundations of the nave, the gable of the south transept, the cloisters, quadrangle and the vaulted chapter-house.

Wigtownshire was constituted a shire the thirteenth century and distinguished as "the Shire" in contrast to "the Stewartry" of Kirkcudbright. In 1333, during David II's reign Kirkcudbrightshire was surrendered to Edward III in 1333, but Wigtownshire remained Scottish territory. In 1342 Sir Malcolm Fleming, Earl of Wigtown, was appointed sheriff over Wigtownshire, but falling into straitened circumstances he sold his earldom and estates in 1372 to Archibald the Grim, 3rd Earl of Douglas, thus placing all Galloway under one lord. Under Douglas's lordship the laws of Galloway, which had obtained from ancient times and included, among other features, trial by battle (unless an accused person chose expressly to forgo the native custom and ask for a jury), were modified, and in 1426 abolished, the province then coming under the general law. Soon after the fall of the Douglases (1455) the Kennedy family, long established in the Ayrshire district of Carrick, obtained a preponderating influence in Wigtownshire.

In 1451, the office of sheriff was vested in the Agnew family as a hereditary possession. In 1509, David Kennedy was created Earl of Cassillis. Gilbert, the 4th Earl, so powerful that he was called the "King of Carrick," held the shire for Mary, Queen of Scots, when she broke with the Lords of the Congregation, but could do little for her cause. He profited by the Reformation himself, however, to acquire by fraud and murder the estate of Glenluce Abbey in about 1570.

In 1603 James VI appointed a bishop in the see of Galloway which had not been filled for twenty years, but the inhabitants stood firm for the Covenant. The acts against nonconformity were stringently enforced and almost every incumbent in Galloway was deprived of his living. Field-preaching was a capital crime and attendance at conventicles was treason. A reign of terror supervened, and numbers of persons emigrated to Ulster in order to escape persecution. "Bonny" Dundee became sheriff in 1682 (as Sir Andrew Agnew failed the confessional test) but his severity goaded the people into rebellion; the drowning of Margaret MacLachlan and Margaret Wilson within flood-mark in Wigtown Bay in 1685 being an instance of his ruthless methods. With the Revolution of 1688 Presbyterianism was restored, and John Gordon, recently consecrated Bishop of Galloway, retired to France.

The Jacobite risings of 1715 and 1745 excited only, languid interest. In 1747 heritable jurisdictions were abolished and Sir Andrew Agnew ceased to be hereditary sheriff, though he was the only official able to prove continuous tenure of the post since it was granted to his family in 1451. The first appointed sheriff was Alexander Boswell, Lord Auchinleck, father of James Boswell, the biographer of Dr Johnson. In 1760 an engagement took place in Luce Bay, when the young French seaman, Francois Thurot, with three warships, attempting a diversion in Jacobite interests, was defeated and killed with the loss of three hundred men and his vessels.

The main towns of Wigtownshire are:

Other significant towns and villages

Things to see in Wigtownshire 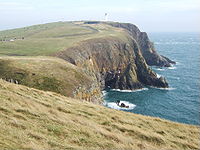 The Mull of Galloway 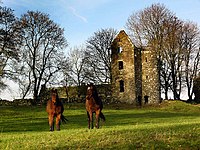