Wigmore is a delightful village in the northwest part of Herefordshire; one of the county's famous "black and white villages". It is reached along the A4110 road, about eight miles west of Ludlow.

The name is attested as Wigemore (1086), Wiggemora (1165), from an Old English name reconstructed as wicgamor. The element wicga is uncertain. One theory suggests that it denotes the yielding quality of the moorland, thus "quaking marsh" or similar.[1]

Wigmore has usually been identified as the Wigingamere of the Anglo-Saxon Chronicle (s.a. 917, 921) in 19th century scholarship, but '’Wigingamere has since been re-identified with Newport, Essex.[2] The Herefordshire identification goes back to Edward Lye, who recorded a Wicinga-mere (introducing an association with Vikings) as a villa in agro Herefordiensi.[3]

An early settlement on a hill close by the location of the present village seems to have been called Merestone or Merestun (from the Old English Mersc, meaning mere or marsh and Tun, meaning enclosure, farmstead, village, manor or estate - thus literally "village by the marsh"). The name of the marsh itself seems to have been applied to the later village.

Although Roman remains have been found in the area (near Bury Farm, to the east) on the western branch of Watling Street (which crosses Wigmore Moor). Wigmore Church is an Anglo-Saxon foundation, with substantial surviving wall portions dating to the 10th century.

At the time of the reign of Edward the Confessor, the barony of Wigmore belonged to Edric Sylvaticus, the Earl of Shrewsbury. However, he refused to submit to William the Conqueror and was defeated in battle and taken prisoner. His possessions were subsequently granted to William FitzOsbern, the Earl of Hereford appointed by King William from 1068 to 1072, as a reward for his services.

FitzOsbern built Wigmore Castle, as it became known. Although it was probably initially only built of earth and timber, it was to become one of the main English border castles along the Welsh Marches during the thirteenth and fourteenth centuries.

FitzOsbern's son, Roger de Breteuil, took part in the Revolt of the Earls; after the Earl's subsequent defeat William I seized the castle and gave it to another of his supporters, Ranulph de Mortimer. From this time on Wigmore became the head of the barony of the Mortimers, Earls of March.

Wigmore is one of very few Herefordshire boroughs recorded in the Domesday Book. Although Hereford was the only borough in the county in 1066, boroughs were attached to the castles of Clifford (also built by FitzOsbern) and Wigmore by 1086.

Wigmore, at the time situated in the Hazeltree hundred, is mentioned three times in the Domesday Book. The first entry is under the lands held by Ranulph Mortimer and records that he holds Wigmore Castle, which Earl William built on wasteland that was called Merestun, which Gunfrid held before 1066. It also records that there were two hides that paid tax, two ploughs in lordship and four slaves. The borough of Wigmore is recorded to have paid 7 pounds - "bergu qd ibi est redd vii lib". Secondly, in the section recording the lands of the king, Merestone is recorded as being a part of the manor of Kingsland which Ranulph Mortimer held for the king. A third section mentions that Ranulph Mortimer holds Wigmore, which Alfward held, and that there is half a hide, which Wigmore Castle is situated upon. If a rental of 12 pence per burgage (as was customary with other rental properties at the time), the money paid by the borough may represent about 140 burgages.

Although it is not considered to have been a failed borough, as it was a fairly prosperous small market town during the thirteenth and early fourteenth centuries, Wigmore does not seem to have flourished as much as others in the region, such as Bromyard.

There are two 14th-century extents (assessments or valuations of land for taxation purposes) preserved in the Public Record Office which include the settlement. In the one of 1304 it was recorded that there were 102 tenants who held 140 and a quarter burgages. It was also recorded that there was a weekly market and a fair, which was held on the feast of St Andrew.

The importance of Wigmore as a market town was at least partly due to the influence of the Mortimer family and their castle, which probably attracted much local and regional business to the town. However, Wigmore's prosperity probably waned somewhat in the mid-14th century when the Mortimer family moved its administrative centre to Ludlow Castle, which they had inherited through marriage in 1314.

Wigmore Castle remained the Mortimer family's official seat for the next 250 years, until the demise of their house. When the male line of the Mortimers died out in 1424, the castle passed to the crown. It was maintained throughout the sixteenth century, partly as a prison, although the castle was already in decay. The town of Wigmore shared the fate of the castle and it declined to village status by the 16th century. The castle was finally dismantled in 1643 to prevent its being garrisoned during the Civil War. 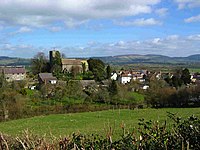 Wigmore was one of the first areas in Britain to have an Enclosure Act. Dating from 1772, this act affected the moor and woods nearby. The dividing earth banks still survive.

In 1870 - 1872 it was recorded in the Imperial Gazetteer of England and Wales that Wigmore village was a seat of petty-sessions and that it had a post office, a police station, two Methodist chapels and a national school. Fairs were held on 6 May and 5 August. The parish included part of Limebrook and was in the Ludlow district. The size of the village was 3,441 acres, it had a population of 499 and 104 houses. Regarding the Wigmore Hundred, it was recorded that it contained 14 parishes and 5 parts. It had a size of 47,075 acres, a population of 6,309 and contained 1,234 houses.