Wick is an estuary town and a royal burgh on the east coast of Caithness, of which it is the county town.

Wick stands on the River Wick and along both sides of Wick Bay. The Bay provides a capacious harbour, around which both the grand buildings of the town stand and its practical functions as a small port.

Pulteneytown, which was developed on the south side of the river by the British Fisheries Society during the 19th century, was merged into the burgh in 1902.

The town is joined to the rest of Great Britain by the A99 north to Thurso and the north coast and south along the east coast. Minor roads run to Caithness's inland villages. The Far North railway line links Wick with southern Britain and with Thurso, the other burgh of Caithness. Wick Airport on Wick's northern outskirts has two usable runways, a third lying derelict.

In 2006 the BBC reported that the Guinness Book of Records had confirmed the world's shortest street as Ebenezer Place in Wick, measuring 6 feet 9 inches, and containing just one door. It had not previously qualified for the record because it did not have a full postal address.[1]

Pulteneytown is now an area of Wick on the south side of the River Wick. Pulteneytown takes its name from Sir William Pulteney, 5th Baronet, a governor of the British Fisheries Society. In the early years of the 19th century Sir William commissioned Britain's leading civil engineer, Thomas Telford, to design and supervise the creation of a major new herring fishing town and harbour at the estuary of the River Wick.[2]

Pulteneytown was so named after the death of Sir William in 1805 and became a major player in the 19th century herring boom. It was built in order to supply work to the Gaels evicted during the Highland Clearances and who had come north to Caithness.[3] During this boom period the harbour was expanded still further by local shipbuilder James Bremner. History of this era is preserved in the collections of Wick Heritage Museum.

Pulteneytown Parish Church (of the Church of Scotland) is in Argyle Square and was opened in 1842.

Wick Bay off the North Sea is roughly triangular from the where the river enters the Bay, the bay broadening to South Head and North Head, standing over half a mile apart.

The River Harbour with the ex-RMAS Fleet Tender Ilchester

Wick Inner Harbour now has an extensive marina complex, and is fast becoming a base for leisure boating. It is also now a well known stopping point for visiting pleasure craft.[5]

Wick River, known also as River Wick, has its source near Achigale Mill at the northern end of Bardarclay Moss in the Flow Country of Caithness. The estuary is out to the North Sea is Wick Bay. The town of Wick stands at the mouth of the river on both banks.

The river basin includes Loch Watten and Loch Tofingall to the west of the estuary, and Loch Hempriggs and the Loch of Yarrows to the south-southwest.

Wick was founded by the Norse, its name derived from an Old Norse word meaning bay or possibly "settlement".[6] Caithness was heavily settled by the Norse and for a long time the Earls of Orkney ruled Caithness also. Norwegian rule in Caithness ended conclusively in 1266 with the Treaty of Perth.

The Castle of Old Wick is on the coast about ½ mile south of the town, built in the 12th century by Harald Maddadsson, Earl of Orkney. 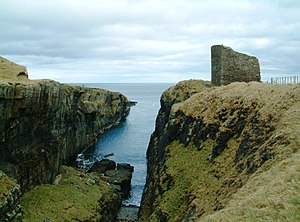 The Castle of Old Wick, known also as the Old Man of Wick was built in the 12th century when the Norse earldom of Orkney included Caithness, and was united under Harald Maddadsson. The castle is thought to have been the Earl's stronghold on the mainland of Britain. There is evidence that the site was occupied before the present castle was built.

All that remains today is a tall tower sitting on the very edge of the cliffs, about half a mile south of Wick Bay and of the modern town of Wick, but originally the castle had at least 4 stories as well as extra buildings containing workshops and other quarters.

During the 14th century the castle was owned by Sir Reginald de Cheyne who was a supporter of King Edward I during his attempt to establish John Balliol as King of Scotland, although there is no evidence of any battle's having taken place there. It was abandoned in the 18th century. [7]

The castle was built to the same plan as Brough Castle, which is about 18 miles to the north/north-west, on the Pentland Firth coast of Caithness.

Wick Heritage Museum is in Bank Row, Pulteneytown. The museum is run by the Wick Society, with a strong focus on the herring-boom era of Wick's history.

The Wick Carnegie Library is now run by the local council. As well as providing a general library service the library preserves valuable books and other documents about Wick and Caithness and their histories. Also it preserves an Indian crocodile presented by Sir Arthur Bignold in 1909.[8]

The library building also houses the North Highland Archive and the St Fergus Gallery exhibitions. The North Highland Archive is part of the Highland Council Archive Service, and holds collections of official and private papers, the earliest dating from 1589, relating to Wick and the county of Caithness.[9] Construction of the library building, 1897, was part funded by Andrew Carnegie. It is at the junction of Sinclair Terrace and Cliff Road. 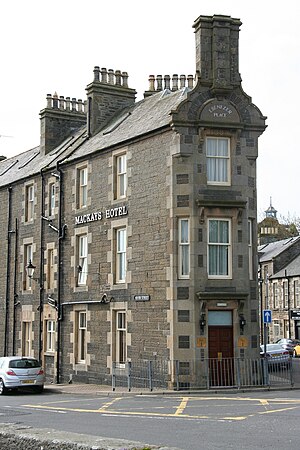