Whittingehame is a parish with a small village in East Lothian, off all the main roads, south of East Linton. South of the village the B6370 between Dunbar and Gifford passes by, Whittingehame halfway betwixt the twain.

It is a scattered village. The church and attendant houses are down in the wooded valley of the Whittingehame Water, which soon after swells to become the Biel Water before entering the Firth of Forth several miles below. Whittingehame Mains is a little up the hill to the north, on the lane out to the village of Traprain.

The area is on the slopes of the Lammermuir Hills. The famous Traprain Law is a hill which rises just to the northwest of the village.

Whittingehame Tower dates from the 15th century and remains a residence.

A parochial school, of which the laird was patron, was long established at Whittingehame, and in 1742 Mr James Hogg was appointed schoolmaster there, transferred from neighbouring Morham.

In 1820 James Balfour rebuilt the church, supplanting the previous rebuild of 1722, and then established, in 1840, a new model village to the north-west of the former mediæval settlement. It consists of a schoolhouse and a string of cottages, all in red sandstone.

The Barony of Whittingehame was anciently the possession of the Dunbar family, the Earls of March, and Chalmers' Caledonia records that they held their baronial court there. In 1372 George de Dunbar, 10th Earl of March, gave in marriage with his sister Agnes to James Douglas of Dalkeith, the manor of Whittingehame, with the patronage of the Chapel. The Douglases remained in possession for over 200 years: about 1537 Elizabeth (d. after August 1557), daughter of Sir Robert Lauder of The Bass (d. 1517/18), married William Douglas of Whittingehame, and in October 1564 Mary, Queen of Scots, confirmed to their son, William Douglas of Whittinghame (d. 17 December 1595), a Senator of the College of Justice, the barony of Whittingham, the castle, mills, and the avowson of the Church there, ratified by parliament on 19 April 1567. This William Douglas had married in 1566 Elizabeth (d. after 6 August 1608), daughter of Sir Richard Maitland of Lethington, a Senator of the College of Justice.

On 28 December 1630, Sir Archibald Douglas, 5th of Whittingehame, son and heir of the previous couple, was a witness to the baptism of Archibald Sydserf at Whittingehame Church, but by 1640 Sir Archibald was dead with no issue. Whittingehame passed to his brother Sir William Douglas of Stoneypath, near Garvald, whose daughter Isobel married, in 1628, Sir Arthur Douglas of the Kellour family, and their daughter Elizabeth (1632–1668) married, in 1652, Alexander Seton, 1st Viscount of Kingston and carried Whittingehame to him (Elizabeth's brother Archibald having died unmarried). Their youngest daughter Elizabeth, carried Whittingehame to her husband William Hay of Duns and Drumelzier, Peebleshire, upon their marriage in 1695. The Hays, as proprietors, were highly esteemed by their tenants.

In 1817 they sold Whittingehame and Stoneypath, near Garvald, to James Balfour, the second son of John Balfour, 5th of Balbirnie in Fife, who had made a large fortune in India. James Balfour subsequently enlarged his estate by buying up a great many adjoining properties. Balfour's son, was Arthur James Balfour, who became Prime Minister (in succession to his maternal uncle, the 3rd Marquess of Salisbury).

By 1900 there were about 25 farms on the Whittingehame estate. The coal mines on their Fife lands greatly increased their prosperity throughout the 19th century. 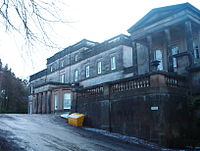 Whittingehame House is a huge country house which is an A-listed building. It was built for James Balfour and is now sold off and divided into private apartments.

James Balfour engaged James Dorward, from Haddington, to build a new neo-classical mansion and offices to designs by Sir Robert Smirke, Whittingehame House, completed about 1817, with additions and alterations by architect William Burn ten years later. This became the family home of the Balfours and the birthplace of the Prime Minister Arthur Balfour[1] and the scientist Francis Maitland Balfour.

Between 1939 and 1941, Whittingehame was converted into a school for Jewish refugee children coming to Britain through the Kindertransport. The school, known as the Whittingehame Farm School, sheltered 160 children between the ages of 7 and 17.

The house has passed through various hands after the Balfours and at one time it was a private school - Holt School - but this closed and the property lay dormant. It is not open to the public though for privileged visitors there is still much of interest to see, including a spectacular ceiling to the dining room. 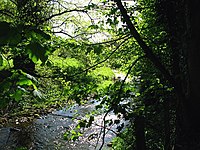