Difference between revisions of "Whitchurch, Glamorgan"

Whitchurch is a village in Glamorgan grown into a suburb in the north of Cardiff. It is found some 3 miles north of the centre of the city on the A470 road and A4054 road. Its estimated population as of 2004 was 15,649. 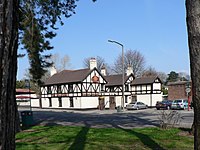 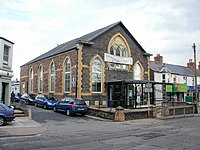 The national office of the Presbyterian Church of Wales is located at the Tabernacle Church, Whitchurch.

Whitchurch lies between two urban rail line on the Valley Lines network. The Merthyr Line runs through neighbouring Llandaff North stopping at Llandaf railway station, near Whitchurch. Trains run between the Cardiff Valleys and the Vale of Glamorgan via Cardiff city centre. Whitchurch (Cardiff) railway station is located on the Coryton Line where trains run between Coryton and Radyr by way of the city centre.

The name "Whitchurch" is a common placename in Great Britain and here, as elsewhere, it means simply "white church". This may refer to the chapel built around 1126 or to an earlier church.

The earliest surviving mention of Whitchurch is from 1126 when the land was granted to Llandaff Cathedral and a chapel was built where Old Church Road now runs. The chapel and later church remained dependencies of the cathedral until 1845 when Whitchurch became a separate parish.

The area succumbed to the Normans in 1266 and they created the manor of Whitchurch which included parts of today's Llandaff and Rhiwbina. The Normans built Castell Coch in Tongwynlais to protect the approached to Cardiff. The castle had become a ruin by the 16th century.

Until the early 18th century there were no more than around 300 people living in about 50 farms and cottages in Whitchurch, but by the end of the 19th century, this had risen to nearly 5,000. An education report of 1847 reported that 8% of Whitchurch's children attended school. In 1854, the area's first national school was built, charging 2d a week. Whitchurch High School opened in 1937.

In the 19th century, the Marquess of Bute assumed responsibility of Whitchurch Common. The family's attempt to produce wine on the slopes below Castell Coch was short-lived, but they bottled 40 gallons in 1887.

The Melingriffith Tinplate Works were built in northern Whitchurch in 1749, on the bank of the River Taff opposite Radyr. The works were built on or near the site of an old corn mill that had operated as far back as the late 12th century. Melingriffith was the largest working tin factory in the United Kingdom, until the much later construction of the Treforrest Tin Works.[3]

The tin mills were powered exclusively by water drawn from the River Taff down the Melingriffith feeder stream, a water course that doubled as a canal that carried raw iron ore from the Pentyrch Iron Works until around 1815, when the Pentrych tramroad was completed. The tramroad crossed the River Taff over the Iron Bridge. The feeder’s lock was permanently closed in 1871 when it was bridged over, but traces of it still remain.

The tin works closed in 1957, and today the only signs that the works ever existed at all are the mostly dry bed of the original Melingriffith feeder stream that still runs down from the River Taff from just above the Radyr weir, and the recently restored water pump standing opposite Oak Cottage. The works site itself has been completely cleared, and is now a modern housing estate.

The Melingriffith feeder stream made its way to the original Glamorganshire Canal, where they ran in parallel through the tin works and out the other side at Melingriffith Lock. Where they had come together north of the tin works, any overflow from the canal was originally designed to empty into the feeder. This point is now at the southern end of the Glamorganshire Canal Local Nature Reserve and all the water from the canal runs into the feeder before disappearing into a piped water course that passes under the modern housing estate.

At the southern end of the housing estate, the feeder re-emerges at the point where the Melingriffith water pump stands, the pump originally designed to pump water from the feeder into the Canal at Melingriffith Lock. Today, the Glamorganshire Canal has been almost totally overbuilt. Tŷ Mawr Road has replaced the route of the canal from Melingriffith all the way to Whitchurch. 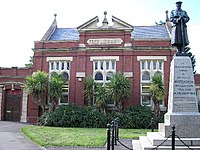