Whalsay is also known as "The Bonnie Isle" and for good reason.[2] It is a peat-covered island, in the sea to the east of Mainland, Shetland and it has an area of 7.6 square miles.

The main settlement is Symbister,[3] where the fishing fleet is based. The fleet is composed of both pelagic and demersal vessels. Other main settlements include, Clate, Isbister, Sandwick, Saltness, Huxter, Challister, Marrister, North Park and furthest north is Skaw.

The island is fertile and fairly densely populated. Crofting takes second place to fishing amongst the local industries. 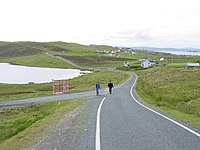 Road between Symbister and Isbister

The island also has an airstrip at Skaw which is used only for emergencies.

Skaw is home to the most northerly 18 hole golf course in the UK. There is a club house with adequate parking. Other sporting facilities on the isle are the Whalsay Leisure Centre, a snooker club and Harbison Park artificial sports field.

Sailing dinghies and Shetland model boats are popular, with an annual Whalsay Regatta, usually taking place in the last week of July. In recent times, the popularity of sailing has declined, with the number of participating boats decreasing with each passing year.

Whalsay has an amateur football club, as well as hockey and netball teams. These teams participate in Shetland leagues. Whalsay FC's home ground is Harbison Park. In 2005, Whalsay FC took part in the Highland Amateur Cup, reaching the fourth knockout round. They beat Halkirk FC 2-0 in the 3rd round, but lost to Pentland Utd 2-1 in the 4th.

Sights of the island

Attractions on the island include the Neolithic ruin of Benie Hoose[4] and the settlement of Sudheim where Hugh MacDiarmid[3] lived in the 1930s and early 1940s.

Whalsay is the location for the 2011 novel Dancing with the Ferryman by Frankie Valente and is the main location of Ann Cleeves's novel Red Bones (Macmillan, 2009), the third of her Shetland quartet.