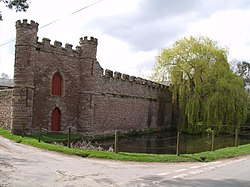 Weston under Penyard is a small village and parish in southern Herefordshire. The ancient parish additionally extends across the border into Gloucestershire. The population of the civil parish at the 2011 census was 1,007.[1]

It lies on the A40 road two miles east of Ross-on-Wye. The Penyard is a prominent hill in the area.

The parish church of St Lawrence has a tall 14th-century west tower which had a spire until it was damaged by lightning in 1750.

A Wesleyan chapel was constructed at Buryhill during the early 19th century but was disused by 1964.[2] The building was subsequently converted for use as private residence.[3]

Slightly to the east under farmland lies the former Roman settlement of Ariconium, which gave its name to the areas known as Ergyng and Archenfield. The name Ariconium is Romano-British and may conceivably have an equivalent in or near the Roman province of Galatia.

On the edge of the village is Bollitree Castle, which is currently owned by former Top Gear presenter Richard Hammond. It comprises a house built c. 1700 incorporating the remains of an earlier building, to which castellated walls, turrets and moat were added in the late eighteenth century. Two miles south west are the fragmentary remains of Penyard Castle, a fourteenth-century castle on the site of which was built a seventeenth-century house.