Westminster Bridge is a road and foot traffic bridge over the River Thames in London, linking Westminster in Middlesex on the north side to Lambeth in Surrey on the south side.

In 2005–2007 the bridge underwent a complete refurbishment, including replacing the iron fascias and repainting the whole bridge.

It links the Palace of Westminster on the west side of the river with County Hall and the London Eye on the east and was the finishing point during the early years of the London Marathon.

The next bridge downstream is the Hungerford footbridge and upstream is Lambeth Bridge. Westminster Bridge was designated a Grade II* listed structure in 1981.[2]

For over 600 years, London Bridge was the only bridge over the Thames below that at Kingston. A bridge at Westminster was proposed in 1664, but opposed by the Corporation of London and the watermen. Eventually in 1729 a new timber bridge was built at Putney, but it took until 1736 before Parliamentary approval was given for another, at Westminster. The new bridge was financed by private capital, lotteries and grants, and designed by the Swiss architect Charles Labelye. It took eleven years to build, between 1739 and 1750.

The City of London responded to Westminster Bridge by removing the buildings on London Bridge and widening it in 1760–63. The City also began work on the Blackfriars Bridge, which opened in 1769. Other bridges from that time include Kew Bridge (1759), Battersea Bridge (1773), and Richmond Bridge (1777).

The bridge was required for traffic from the expanding West End to the developing suburbs in northern Surrey as well as to south coast ports. Without the bridge, traffic from the West End would have to negotiate the congested routes to London Bridge such as the Strand and New Oxford Street. Roads south of the river were also improved, including the junction at the Elephant & Castle in Southwark.

By the mid 19th century the bridge was subsiding badly and expensive to maintain, and had to be replaced. The current bridge was designed by Thomas Page and opened on 24 May 1862.[3] With a length of 820.2 feet (250.0 m) and a width of 85.3 feet (26.0 m),[4] it is a seven-arch wrought iron bridge with Gothic detailing by Charles Barry (the architect of the Palace of Westminster). It is the oldest road bridge across the Thames in central London. 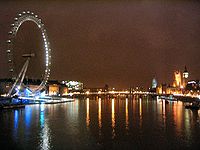 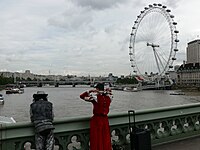 Earth hath not anything to show more fair:
Dull would he be of soul who could pass by
A sight so touching in its majesty:
This City now doth, like a garment, wear
The beauty of the morning; silent, bare,
Ships, towers, domes, theatres and temples lie
Open unto the fields, and to the sky;
All bright and glittering in the smokeless air.

In modern times the bridge has frequently been used as a set or a backdrop on film and television: the Palace of Westminster behind it is an unmistakable geographical tag.

In the television series Doctor Who, Westminster Bridge has frequently been used for various location shots, first in 1964 in the serial The Dalek Invasion of Earth which depicts the structure as desolate and deserted as the Daleks glide across it: quite a contrast to it usual state, packed with commuters and tourists. The location was then re-used several times in later series.

The same theme was used in the 2002 horror film 28 Days Later, the protagonist awakes from a coma to find London deserted, and walks over an eerily empty Westminster Bridge whilst looking for signs of life.

To list all the appearances of Westminster Bridge on film or in television would take volumes.

Westminster Bridge is the start and finish point for the Bridges Handicap Race, a traditional London running race.