Westbury-on-Severn is a rural village and parish in western Gloucestershire, just to the east of the Forest of Dean. 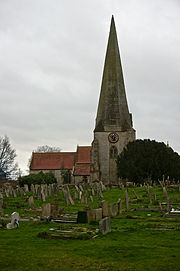 The village is situated on the A48 road (between Minsterworth and Newnham on Severn) and bounded by the River Severn to the south and west. Westbury is also bounded to the west by the Newport to Gloucester railway line, although Westbury does not have a railway station, the closest stations being Gloucester and Lydney.

The village has a large parish church, which is distinctive, as the steeple is not attached to the main building because of a fire which burned down the old wooden building soon after the new steeple was completed. Within the porch of the church are several markings of crosses and full crosses made during the English Civil War. The north porch and north aisle are the oldest parts of the church, having been built around 1290.[3]

Just to the East of the village centre is the National Trust-owned Westbury Court Garden.