From Wikishire
Revision as of 17:21, 7 August 2014 by Owain (Talk | contribs)
(diff) ← Older revision | Latest revision (diff) | Newer revision → (diff)
Jump to: navigation, search
Not to be confused with Westlinton in Cumberland

West Linton is a village in Peeblesshire. Many residents are commuters due to the village's close location to Edinburgh which is 16 miles to the north east. It is a small village of family homes.

The Whipman is an annual summer festival held in the village, and is one of the oldest festivals in the Middle Shires. The festival commences on the Friday before the first Saturday in June, and runs until the following Saturday. The Whipman Play Society was formed in 1803 by local young men to alleviate hardship and illness for its members and in the community at large[1] 42 years before the Poor Law Amendment (Scotland) Act, 1845[2] and possibly before the first insurance company in Scotland.

A local man is elected to the office of "Whipman" and he chooses a young lady to be his "Lass". These two represent the village at other Borders festivals throughout their year in office. The celebrations begin with the Installation of the Whipman & Lass, followed by a celebratory ceilidh. The following day, the Ride Out (of around 80 to 100 horses) introduces the Whipman to the area, and a full week of events culminates in the annual sports day, held on the village green. 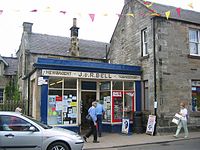