From Wikishire
Revision as of 12:09, 31 March 2017 by RB (Talk | contribs) (→‎Along the route)
(diff) ← Older revision | Latest revision (diff) | Newer revision → (diff)
Jump to: navigation, search
Not to be confused with the Weavers Way in Norfolk 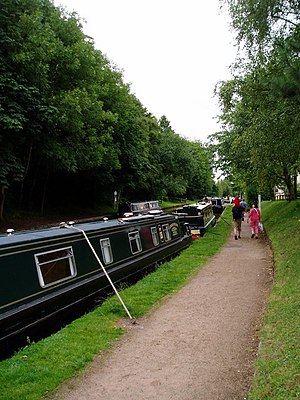 Walking the Weaver Way by Audlem

The Weaver Way is a forty-mile waymarked route through Cheshire, following in part the River Weaver, and running from Audlem in the south to Frodsham at the head of the Mersey Estuary in the north.

From here the path follows the canal for some miles before reaching the canalised section of the River Weaver, the Weaver Navigation, and continues north, eventually joining the Trent and Mersey Canal, which leads to Frodsham.

The route is rich in wildlife along the rivers and canals; kingfishers dart across the river and wildfowl abound.

Along the route there are sites telling of Cheshire's historical and industrial heritage. Just off the route os the Salt Museum in Northwich, telling of the long story of industrial salt extraction in the county. The Anderton Boat Lift has been restored, which can carry a boat 50 feet up from the River Weaver to the Trent and Mersey Canal.

There are many delightful villages along the way. Picturesque towns along the Weaver Way include Audlem and Frodsham at either end, and Nantwich in the heart of the salt country, with its streets of half-timbered buildings.

Linking to the Weaver Way, the Whitegate Way is a seven-mile route from Winsford to Cuddington, near Delamere Forest Park. Shady wooded cuttings contrast with sunny open embankments, offering spectacular views over the Cheshire countryside.