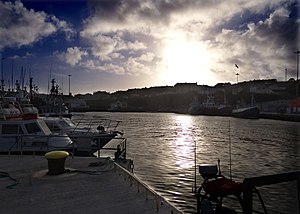 Waterford Harbour is a bay and a capacious natural harbour on the south coast of Ireland, separating County Waterford with County Wexford. Into this bay flow the mouth of three rivers which come together here and are known as The Three Sisters: the River Nore, the River Suir and the River Barrow in Ireland. It is known in Irish as Loch Dá Chaoch or Cuan Phort Láirge.

The harbour is navigable for shipping to both Waterford and New Ross. The Port of Waterford is capable of accommodating vessels up to 32,000 tons deadweight tonnage.

Dunmore East is a fishing village and popular holiday resort situated on the west side of the harbour and is generally considered to be the western limit. On the west side, there is also a headland called Creaden Head The eastern limit is Hook Head, marked by the Hook Lighthouse, on the Hook peninsula.