Difference between revisions of "Washington"

Washington is a town in the north of County Durham, found equidistant from the centres of three cities - Newcastle upon Tyne, Durham and Sunderland - and with close ties to all three.

Washington was designated a new town in 1964 and expanded dramatically by the creation of new villages and the absorption of areas of Chester-le-Street to house overspill population from surrounding cities. At the 2001, the town had a population of 53,388.[1]

The name of Washington has been much discussed, not least because American historians are interested in the family origins of their great General and first President of the same name.

Place-names ending -ington are particularly prevalent between the Tees and the Forth. Washington does not appear in the Domesday Book of 1086 as County Durham was excluded but it is generally accepted though that the original name would have been Hwæsingatun or similar, which roughly means "estate of the kin of Hwæsa". The name Hwæsa is not otherwise known to history, nor can it be known whether this presumed progenitor was personally present in the first village here or whether the Hwæsingas were a clan named after a long-dead ancestor.

However, there has been no evidence found of any chieftain/land owner/farmer in the area by the name of Hwæsa, although any such records from the time would likely have been long lost by now.

One of the more popular origin theories, not accepted by scholarship, is that Washington means "washing hill". This theory likely originates from the proximity between the River Wear and the actual Anglo-Saxon hall of the time (most likely where Washington Old Hall stands today). This idea is however not backed by philology.

The Old Hall and George Washington 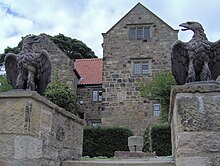 Washington Old Hall may have been built by William de Hertburn, who moved to the area in 1183. As was the custom he took the name of his new estates, and became William de Wessyngton. By 1539 when the family moved to Sulgrave Manor in Northamptonshire the spelling "Washington" had been adopted.

The present Hall is an early 17th century small English manor house of sandstone. Only the foundations and the arches between the Kitchen and the Great Hall remain of the original house.

Washington's design was developed through the New Towns concept aiming to achieve sustainable socio-economic growth. The new town is divided into small self-sufficient "villages". It was originally also divided into the 15 original numbered districts, a fate which confused many visitors to the area. These numbered districts have gradually been removed as well as increased, and now road signs indicate the villages' names instead of district number.

Mount Pleasant was also added to the list of numbered districts (14), despite being out of the Town boundary line of the River Wear. Built on industry, Washington contains several industrial estates, named after famous local engineers, such as Parsons, Armstrong, Stephenson, Crowther, Pattinson, Swan and Emerson.

A lot of the land which makes up the town was purchased from the Lambton family, Earls of Durham who own the estate of the same name, which includes their ancestral home, Lambton Castle.

Historically, Washington was heavily involved in the coal industry with a number of pits. One of these in the Albany district of Washington is preserved as the 'F' Pit Museum (pits in Washington were named alphabetically e.g. the 'F' Pit). A number of the old communities of Washington grew up around the pits (e.g. the modern area of Usworth partly grew up around the Usworth mine and the area was known as Usworth Colliery (and still is to some of the older generation). In support of the mines there was a series of wagonways and later railway lines to transport the coal. The wagonways took coal to staithes on the River Wear where it could be loaded onto barges to be taken to the ocean going vessels at Sunderland.

Washington was also involved in the chemical industry and the Washington Chemical Works was a major employer in the 19th century. This later became the Cape/Newalls Works producing insulation. The Pattinson Town area of Washington grew up around the chemical works. This area is now Pattinson industrial estate and Teal Farm housing estate.

Currently, Washington's main industries include textiles, electronics, car assembly, chemicals and electrical goods. The Nissan car plant is a major employer. Nissan is the largest private-sector employer in the City of Sunderland.

The Wildfowl and Wetlands Trust nature reserve and the Washington 'F' Pit mining museum are within the town. The Washington Arts Centre is a converted farm building. The Centre includes an exhibition gallery, community theatre, artist studios and a recording studio.

The North East Aircraft Museum occupies part of the old RAF Usworth base, while the Nissan plant takes up much of the rest. The municipal airport previously run from the site was closed to make way for the Nissan plant.