Difference between revisions of "Wareham Forest" 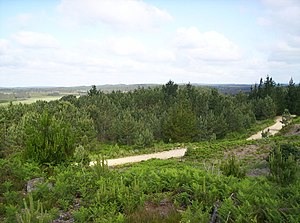 A walk in Wareham Forest

Wareham Forest is an area in the south of Dorset, consisting of open heathland and plantation woodland, the whole overseen by the Forestry Commission for forestry, conservation and recreation. The heathlands within the forest include Decoy Heath and Gore Heath, and there are plantations of conifers such as Morden Heath and Bloxworth Heath.

The forest provides a home for sika deer, the Dartford warbler and a population of sand lizards.

The forest may be seen beside to the A35 road between Dorchester and Poole;

Wareham Forest is rarely in the news, but has its moments. In the summer of 1947 a fire raged across the forest for four days. Flames leapt to over 150 feet high, it severed the road from Wareham to Bere Regis and exploded ammunition left behind from Second World War troop manoeuvres. The blaze and the efforts to fight it appeared even in featured in the American magazine Life on 20 October that year,[1] with a photograph showing firemen trying to flight the blaze.[1] Thanks to the fire brigade, a majority of the forest was saved.[1]

In 2012, a married couple walking their dog over the heath had to be rescued by the Dorset Fire and Rescue Service, after they became stuck in a freezing swamp.[2]

A track that passes through the site comprises part of the 'Wareham Forest Way', a walk that leads from Wareham to Sturminster Marshall.[5] There is also a route for cyclists called the Sika Cycle Trail.[6] Situated to the east of the forest is Morden Bog National Nature Reserve.[7]

Heather and grasses such as Molinia caerulea (or purple moor grass) grow readily at Wareham Forest, give grazing fodder to a population of sika deer.[8]

The nationally scarce Dartford warbler and the nightjar has been observed around here, and sand lizards may also be spotted.[7] The iconic fly agaric (Amanita muscaria), hallucinogenic toadstool, has been recorded within the forest.[9] In 2006 the Journal of Zoology published the results of a nine-year study that looked into the breeding frequency of the site's smooth snakes (Coronella austriaca).[10]

A 55-acre tourist park and campsite now makes up part of Wareham Forest.[11]

The forest provides a backdrop for scenes within R. Hyslop's Wolf's-Head novel, set in the time of Æthelwulf of Wessex.[12]