Valley of the Tomb 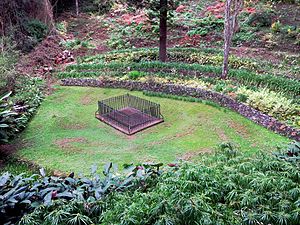 The Valley of the Tomb is a valley beneath Longwood, St Helena on the island of St Helena. It is so named because Napoleon Bonaparte, in exile on St Helena, was buried here after his death on 5 May 1821.

Napoleon's exile on the island lasted just six years before his cancer took him and he passed away at Longwood.

The next day, the Governor of the island, Sir Hudson Lowe, although in perpetual conflict with his former prisoner, personally came to make sure of his death and declared then to his circle of acquaintances:

He was England’s greatest enemy, and mine too, but I forgive him everything. On the death of a great man like him, we should feel only deep concern and regret.

In accordance with his last wishes, Napoleon was interred on 9 May 1821 near a spring, in what was then known as the Valley of the Geranium, but has since been called the "Valley of the Tomb ". He was buried in the valley, beneath a plain slab because it was impossible to reach agreement as to the iinscription: to his retinue, Napoleon was the Emperor Napoleon I, but to the British authorities a usurping general. The French wished the tomb slab to be inscribed “Napoleon” but the British officers wanted "Napoleon Bonaparte". In the absence of agreement, the slab was left blank.

Disinterment and the Seciond Empire

On 15 October 1840, Napoleon’s body was disinterred from the valley at the request of King Louis-Philippe and taken to France, to be reburied in Les Invalides in Paris, an event which revived Bonapartist feeling and led to the King’s downfall in 1848.

From 1854, the new Emperor, Napoleon III, negotiated with the British government the purchase of Longwood House and of the valley in which his uncle had lain, and these have since 1858 been French properties under the name of the Domaines Français, managed by the French Foreign Ministry. The managemnt of the Domaines Français was though a founder member of the St Helena National Trust. The Emperor's first house on the island, a small pavilion at The Briars, the was added to the domaines in 1959, when its last owner donated it to France.