Difference between revisions of "University of Dublin"

The University and the College were was founded in 1592 by Queen Elizabeth I, who issued a charter for Trinity College as "the mother of a university", thereby making this Ireland's oldest operating university. It was modelled after the collegiate universities of Oxford and of Cambridge, but unlike these other ancient universities, only one college was established; as such, the designations "Trinity College" and "University of Dublin" are usually synonymous for practical purposes.

The University of Dublin is one of the seven ancient universities of the British Isles.

Queen Victoria issued letters patent in 1857 giving formal legal foundation to the senate, and other authorities specific to the university. Subsequently, in a remarkable High Court case of 1898, the provost, fellows and scholars of Trinity were the claimants and the chancellor, doctors and masters of the University of Dublin were among the defendants, and the court held that Trinity College and the University of Dublin "are one body".[1] The judge noted pointedly (referring to the then recent founding of University College Dublin) that "[t]he advisers of Queen Victoria knew how to incorporate a University when they meant to do so"[1] and that the letters patent dealt with "not the incorporation of the University of Dublin but of its Senate merely".

Traditionally, sport clubs also use the name "University", rather than "College".

The university is governed by the university senate, chaired by the chancellor or their pro-chancellor. While the Senate was formally constituted by the Letters Patent of 1857 as a body corporate under the name, style, and title of "The Chancellor, Doctors, and Masters of the University of Dublin", it had existed since soon after the foundation of Trinity College being brought into being by the enabling powers contained in the founding Charter. Consequently, the Letters Patent had the effect of converting a preexisting non-incorporated body relying on custom, practice and precedent to establish its authority into a corporate body clearly, and explicitly established in law. The Letters Patent empowered the university senate by stating:-

"It shall be and shall continue to be a body corporate with a common seal, and shall have power under the said seal to do all such acts as may be lawful for it to do in conformity with the laws and statutes of the State and with the Charters and Statutes of the College."

The Letters Patent also defined the composition of the Senate:

"It shall consist of the Chancellor, the Pro-Chancellors, and such Doctors and Masters of the University as shall be members of the Senate in accordance with such regulations and conditions as the Board shall enact." Consequently, the Senate does not determine its own composition. As the "board" is the governing authority of Trinity College, and moreover no business may be put before the Senate save on the proposal of the board, it would seem the university has some degree of subsidiarity to the board of the college. However this is countered by the role of the visitors.

In each academic year, the Senate holds not less than four stated meetings for the conferring of degrees; of these meetings, two are held in Michaelmas Term, and two in Trinity Term. The proceedings of these meetings, conducted in a highly formal and scripted manner, are carried out in Latin. The meeting is held in public and can be attended by persons who are not members of the Senate, mostly relatives of people about to receive degrees, although, of course, only members of the Senate, wearing the correct academic dress participate in the formal business, and actually vote, save that general applause is encouraged when relevant. Although voting takes place at these meetings, discussion does not. Voting takes place to elect a senior master non regent, or on whether degrees should be conferred on named candidates. As the lists of persons to receive degrees are voted on en bloc, and as the lists require the prior approval of the board, which itself receives the names of candidates as agreed by boards of examiners, it can be seen that the vote is purely formal, as it is difficult to see any practical circumstances in which it would be legitimate for a member of the Senate to attend a commencements and register an objection. Honorary degrees, while being conferred at a commencements are not even formally voted on there. Voting on a candidate for an honorary degree takes place earlier, at the previous business meeting of the Senate, so if any objection to a proposed honorary degree award is to be made, it must be made then. It follows that there is no opportunity at the public commencements to object to an honorary degree. 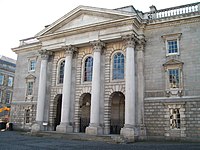 These ceremonies are usually conducted in the Public Theatre in Parliament Square of Trinity College. As business is conducted in Latin the Chief Steward verbally asks for candidates to be put under scrutiny by saying "ad scrutinum", with the Doctors and Masters of the Senate present then asked in turn as distinct groups to consent to the degree being awarded to the candidate. (if they consent they say "Placet", if they do not consent they say "non-placet")

The Senate also holds a stated meeting in Hilary Term for the purpose of transacting business of the Senate other than the conferring of degrees. This meeting is conducted in English. Examples of such business are elections, approving amendments to University Statutes, approving the introduction of new degrees, and agreeing to confer an honorary degree on a specified individual. The actual conferment of such a degree, when agreed takes place at a later public commencements. Both discussion and voting takes place at these meetings, and propositions can be defeated, albeit, in practice, rarely. No business may be put before the meeting save with the consent of the board. Extra business meetings may be held if required. Business meetings are held in private.

The Visitors are also dealt with in statutes. They consist of the chancellor of the university and one other person, usually, in modern times, a member of the Judiciary, and whose appointment requires the approval of the Senate. (So, in effect, both Visitors are university, not college appointments.) They are a final appeal should anyone contest a decision of the board or a procedure within college which has been appealed through departmental school, faculty, council, and board levels and is still contested. The visitors can therefore overturn a decision of the board. Given the chancellor of the university is one of two visitors and has the overall authority in difference of opinion between both visitors, it would seem the board of the college has also some degree of subsidiarity to the university.

It would be fair to say that the practical influence of the Senate has tended to diminish, as at one time it was the only formally constituted forum at which staff of the college, in particular those who were not Fellows, could have an input into the governance of the college and university. With the addition of elected representatives to the board, and the constitution of the council, which was largely elected from the start, issues which might once have been the subject of heated debate at a business meeting of the Senate are now decided elsewhere, with controversy mostly exhausted by the time an issue gets to the Senate for final determination. Consequently, the real importance of the Senate is as a mechanism to ensure that the other bodies carry out their functions properly lest they be queried at a Senate meeting.

The university has been represented in Parliament since 1613 when King James I granted it the right to elect two members of parliament to the Irish House of Commons. When the Kingdoms of Ireland and Great Britain were joined with the Act of Union of 1800, which came into force in 1801, the university sent one MP to the British House of Commons at Westminster until 1832, when it was given another. It continued to elect two until the establishment of the Irish Free State in 1922. The Government of Ireland Act 1920 provided for a House of Commons of Southern Ireland, for which the university was to elect four MPs: these were the only MPs to attend the opening of the House in 1921 since Sinn Féin candidates in the twenty-six counties were returned unopposed and took the other 128 of the 132 seats.[2]