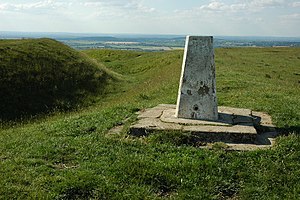 Uffington Castle is an early Iron Age (with underlying Bronze Age) hill fort crowning the top of White Horse Hill in Berkshire, on the Berkshire Downs, very close to the White Horse of Uffington, which spreads over the slope of the hill.

The fort covers about 32,000 square yards and is surrounded by two earthen banks separated by a ditch with an entrance in the western end. A second entrance in the eastern [1] end was apparently blocked up a few centuries after it was built.[2]

The original defensive ditch was V-shaped with a small box rampart in front and a larger one behind it. Timber posts stood on the ramparts. Later the ditch was deepened and the extra material dumped on top of the ramparts to increase their size. A parapet wall of sarsen stones lined the top of the innermost rampart.

Excavations have indicated that it was probably built in the 7th or 8th century BC and continued to be occupied throughout the Iron Age. Isolated postholes were found inside the fort but no evidence of buildings. Pottery, loom weights and animal bone finds suggest some form of occupation however. The most activity appears to have been during the Roman period as the artefacts recovered from the upper fills of the ditch attest. The ramparts were remodelled to provide more entrances and a shrine seems to have been built in the early 4th century AD. Two oblong mounds, one containing 46 Romano-British burials and one containing eight Saxon burials, lie nearby.

An ancient track passes by the northern entrance to the hill fort, and is known as The Ridgeway. It links to the Icknield Way at Goring, and passes close to Avebury before heading south across Salisbury Plain. It also passes very close to a Neolithic chambered long barrow Waylands Smithy about a mile to the west.

The hillfort is a Scheduled Ancient Monument,[3] and was included in the Ancient Monuments Protection Act 1882 as one of the first 68 sites in Britain and Ireland to receive legal protection. Along with the White Horse of Uffington on the slopes below the ramparts, it is in the care of English Heritage.