Bridge across the A1 near the windmill

Tuxford is a village and parish in the Bassetlaw wapentake of Nottinghamshire. It may also be considered a small town as it was historically a market town. At the 2001 census, it had a population of 2,516,[1] increasing to 2,649 at the 2011 census.[2]

Nearby larger towns are Retford and Newark-on-Trent. The southern boundary of the parish follows Goosemoor Dyke. To the south is Egmanton, on the opposite side of the dyke. At the point where the boundary crosses the railway to Ollerton, it meets Kirton. At Priors Park Farm where it crosses the A6075, it meets Walesby. At Willoughby Hill next to the British Telecom mast, on south of Farleys Wood, the parish boundary meets West Markham. Directly south of West Markham, the boundary meets East Markham and to the east is Fledborough.

The Great North Road runs through the village (now the B1164), though the majority of traffic now uses the modern A1 trunk road, which splits the village in two. The village was bypassed in July 1967, opened by Stephen Swingler. The section of road, known as Carlton to Markham Moor, or the Sutton-on-Trent, Weston and Tuxford Bypass, was built by Robert McGregor & Sons, with concreting aggregates supplied by Hoveringham Gravels (later bought by Tarmac). The eight-mile section was authorised by Tom Fraser with a contract for £2.7 million, but ended up costing £3.4 million. The section is notable for the first use in British construction of the slip-form paver using pervious concrete. The bridge sections came from Boulton & Paul Ltd in Norwich.

The A6075 passes through east–west and connects the A57 to Ollerton and Mansfield. The East Coast Main Line passes close to the east. The A611 previously went east–west through the village; this is now the A6075; the A611 now goes from Mansfield to Hucknall.

Tuxford has formerly been known as Tuxford in the Clays, Tuckers Ford, and in the Domesday Book as Tuxfarne. 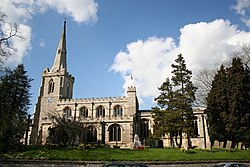 The Church of England parish church[3] of St Nicholas dates from the 12th century. Tuxford also has a Methodist church, whose current building was erected for another Free church in 1841.[4]

Tuxford's local library is housed in a 17th-century building that was originally the Read Grammar School. The school was founded in 1669 by the bequest of Charles Read (1604–1669), who was born at Darlton about three miles from Tuxford, and became a wealthy shipper in Hull. Read also founded grammar schools at Corby Glenn in Lincolnshire and Drax in Yorkshire. Read Grammar School in Tuxford closed in either 1912[5] or 1915.[6] The building served for a time as a child welfare centre before becoming the local library.

Tuxford has a village lock-up: one of only three in Nottinghamshire. Built in 1823 it stands [1] on the village green in Newcastle Street. It has two separate cells, one each for men and women, each with its own earth closet. Ventilation to each cell is via two circular holes, with iron bars on the front and back walls. In 1884 an extension was added to the back of the lock-up to house Tuxford's fire engine. Early maps show that also behind the lock-up was the village pinfold, which remained in use until the 1920s.

Tuxford Windmill is a tower windmill, built in 1820 and restored to working order between 1982 and 1993. It is open to visitors daily except Tuesdays throughout the year. The mill with its large white sails dominates Tuxford's skyline. The mill produces flour which is sold from the mill shop. The mill bakery produces cakes, soups & rolls. A wooden post mil once stood close by. It was moved from Grassthorpe in 1874, continued working until about 1926 and was demolished in 1950.

Stone Road End Mill was a brick-built four-storey tower windmill, built before 1840. The mill was out of use by 1906 and now only the 38-foot high tower remains.[7]

In January 1454, Tuxford was the site of a meeting between the Duke of Exeter and Thomas Percy, Lord Egremont, in order to make a sworn confederation in furtherance of their common aims against the Neville family and Lord Cromwell. This was a critical alliance and event in ramping up the violence and tension of the period, which would help lead to the outbreak of the Cousins War (Wars of the Roses) in 1455. 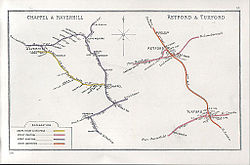 Despite its small size, Tuxford had three railway stations but all are now closed. The Great Northern Railway opened the East Coast Main Line through Tuxford in 1852. The GNR's station at Tuxford was served by local trains between Newark-on-Trent and Retford. In 1897 The Lancashire, Derbyshire and East Coast Railway opened its line through Tuxford, linking Sheffield and Chesterfield with Lincoln. The LDECR called its station Tuxford Town, and the GNR renamed its station Tuxford North. In 1907 the Great Central Railway took over the LDECR and renamed Tuxford Town as Tuxford Central. Dukeries Junction station was built where the two railways cross, and was a split-level affair with platforms on both lines, existing solely as an interchange point surrounded by open fields with no proper road access. Its name was taken from The Dukeries district of Nottinghamshire.

In March 1950 British Railways closed Dukeries Junction station. It had had minimal use throughout its life. In July 1955 BR closed Tuxford North and withdrew passenger services from the former LDECR line in September of the same year, resulting in the closure of Tuxford Central. The former LD&ECR railway line has since been reopened by Network Rail in 2009 as the High Marnham Test Track for testing trains between Thoresby Jn and High Marnham at speeds of up to 75 mph, with extensive sidings and mock OHL electrification being built at Tuxford approximately five miles away from the former Tuxford Central Station.

There is a Co-op on Newcastle Street in addition to three village pubs.

Tuxford Academy[8] opened as a County Secondary School (secondary modern school) in 1958 and became a comprehensive in 1976. It performs very well compared with most of Nottinghamshire, and especially with most of Bassetlaw. Tuxford School recently underwent a full re-build, completed in March 2007. A company called Transform Schools (mainly represented by building company Balfour Beatty) spent millions of pounds re-building six secondary schools within the Bassetlaw area as part of a PFI funded project. The new Tuxford School is located on what used to be the old school field along with a field next to it which has been bought over. The site where the old school stood has now been converted into the new school playing field and nature areas. 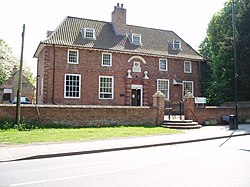 Tuxford Academy has, surprisingly, only had four head teachers during its lifetime to date: Bernard Woodward, Keith Atkinson, Geoff Lloyd, and Chris Pickering and now principal, Mr D Cotton. The school has steadily increased in size (now 1450 students) and reputation, and is one of the highest performing state secondary schools in Nottinghamshire, having gained an OfSTED grade of 'outstanding' in May 2009. It has been designated as a National Support School, is a specialist Technology College and Training School, and leads loose federations of secondary and primary schools in Nottinghamshire.

Tuxford has four youth football teams. Tuxford Gladiators[9] are an U9s team and Tuxford YFC are under 14s both teams compete in the Newark Youth League. Tuxford YFC under 15s also play in the Mansfield League and the under 12s play in Newark.

The footballer Craig Disley comes from Tuxford. He played for Mansfield Town 1999–2004 and has also played for Alfreton Town.