Tullynally Castle is a country house (also known as Pakenham Hall Castle) standing a mile and a half from Castlepollard on the Coole village road in Westmeath. The gothic style building has over 120 rooms and has been home to the Pakenham family (now the Earls of Longford) for over 350 years, except for 32 years in the early 19th century when it belonged to the Ryder family.

The house is surrounded by twelve acres of park land and gardens, including woodland gardens and walled gardens laid out in the early 19th century with a limestone grotto and ornamental lakes. In the 21st century a Chinese garden with a pagoda and a Tibetan garden of waterfalls and streams have been added.[1]

The site entrance from the public road is a mile outside Castlepollard on the Granard road twelve miles from the county town, Mullingar. The grounds are open to the public. 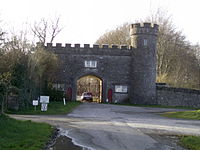 In 1665, Henry Pakenham, a captain in the Parliamentary Dragoons, was granted land in lieu of pay arrears that included Tullynally. His grandson Thomas was made first Baron Longford in 1756. Thomas's grandson, another Thomas and 3rd Baron Longford, also inherited the superior title of 2nd Earl of Longford in 1794 from his grandmother, the Countess of Longford.

The 2nd Earl remodelled the 17th-century house in the gothic revival style in the early 1800s, adding towers and a moat. It was by then larger than any other castellated house in Ireland.

Since then, the house has passed down through successive generations of Pakenhams to the present earl, Thomas Pakenham, 8th Earl of Longford, and is the largest house in private hands in Ireland.[2]

The British Army general, Sir Edward Pakenham, GCB, was born and brought up in the house.