Difference between revisions of "Trinity House of Leith" 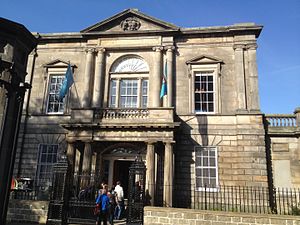 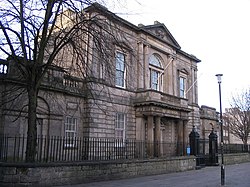 Trinity House stands at 99 Kirkgate in Leith, the port town of Edinburgh on Midlothian's coast. It is a category A listed building[1]

In the Late Middle Ages and Early Modern Era, Trinity House was the headquarters of the Incorporation of Masters and Mariners, a trade incorporation and charitable foundation founded in the 14th century when the shipowners and shipmasters of Leith formed a fraternity In this guise the building was the guildhall of the Incorporation and also served as an almshouse and hospital. In its time though Trinity House has been a customs house and centre for maritime administration and poor relief.

The building standing today is a Georgian neoclassical house, designed by Thomas Brown, built in 1816-8, using the existing basement and vaults of the former Trinity House and mariners' hospital of 1555.[1] Now in the care of Historic Environment Scotland, it houses a maritime museum.

The Masters and Mariners invested in land, which became known as Trinity Mains, near the village of Newhaven. This land later developed into a suburb of Leith and is now the modern-day district known as Trinity. 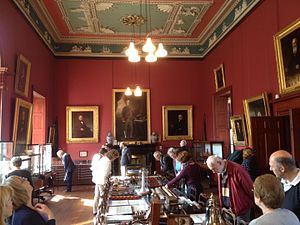 The Masters and Mariners of the Trinity House in the Kirkgate was the oldest and wealthiest of the trade guilds of Leith. The guilds were divided into four groups:[2]

In 1380 King Robert II granted the Incorporation of Master and Mariners of Leith the right to levy a duty, called 'Prime Gilt', of 12 pennies on each ton of goods landed at Leith. An additional voluntary contribution called Crown Money was also collected. Trade was largely conducted over the North Sea, with Scandinavia and the Baltic, the Low Countries and France. The funds raised by the prime gilt and crown money were then used for the relief of the sick, the poor and the widows and orphans of lost or captured mariners; and to care for aged mariners.

In 1555 the Incorporation had sufficient funds to build a hospital at the Kirkgate. The basement of this building survives under the current Trinity House.

Following a series of disputes over payments, in 1566 Mary Queen of Scots confirmed the right the Incorporation to collect payments: ratifying "the gift, foundation, erection and institution of the hospital and of the prime gilt". Refusal to pay would result in the confiscation of sails and anchor.

Concerned to improve safety at sea, Trinity House established the first formal nautical training in Scotland and licensed pilots for the Forth and around the Scottish coast. By collecting Licht Money ('light money'), by the 17th century they were maintaining primitive coal-fired lights in the Forth. In the 19th century, Trinity House was involved in the planning and funding of new and more reliable lighthouses that took advantage of improvements in technology. These included the Bell Rock Lighthouse, Fidra Lighthouse and the Isle of May Lighthouse.

In 1680, funded by fees and by a levy on Leith shipmasters, the Masters and Mariners appointed a professor to teach the mathematics of navigation to the sons and apprentices of shipmasters. This training for future officers was subsequently extended across Scotland.

On 29 June 1797 the Corporation of the Trinity House of Leith was granted a royal charter.

As a result of the requirement for formal qualifications stipulated in the Merchant Seamen Act 1844, in 1855 Trinity House and other Leith organisations founded the Leith Navigational School (also called the Government Navigation School), based at a room at St Ninian's Church (also called the Mariners' Church), on Commercial Street. In 1903 Leith Navigation School came under the control of the Scottish Education Department, and the name was changed to Leith Nautical College (since merged to become part of Jewel & Esk College, which in 2012 merged to become Edinburgh College).

Prime Gilt was abolished in 1862, and so Trinity House had to depend on property income to meet pension payments.