Toton is a small suburbanised village in Nottinghamshire, lying at the western edge of Beeston, close by the Derbyshire border. It is wholly contiguous with Beeston and hence part of the greater urban area spreading out from Nottingham. To the west is the River Erewash, which forms the county border, and beyond it Long Eaton in Derbyshire.

Toton is predominantly residential, but with important commercial and military infrastructure. There is a large supermarket here, and also one of the main entrances to Chetwynd Barracks (also known as Chilwell Depot), which forms a boundary of Toton to the east. More prominent is the railway and the vast area of Toton Sidings, which mark a boundary to the west, and this railway depot, built to move coal, may be the greatest agent for change in the town.

In January 2013, the Department for Transport announced Toton Sidings as on of the new stations to be built on the "HS2" high-speed rail link from the Midlands to Lancashire and Yorkshire.

The village of Toton has stood since at least Norman times, but little is known of its history. It is known that Toton parish at one time encompassed a much larger area than is now apparent, including much of what is now Attenborough village, and shared a church (probably on the site of St. Mary's, Attenborough) with neighbouring Chilwell parish, an arrangement that was unusual for the times.[1]

The village itself was for most of its history, small and dominated by agriculture. It then grew principally because of Toton Sidings, where stands the Toton Traction Maintenance Depot. The sidings were built as a huge marshalling yard of the Midland Railway, where coal from the Nottinghamshire Coal Field would be sorted before being sent to the rest of the country. Also, the area's population grew substantially during First World War when most of the area of level ground between Chilwell and Toton was occupied by the National Shell Filling Factory No. 6 and the original direct route between Chilwell and Toton became a gated military road, now known as Chetwynd Road. This site is now known as Chetwynd Barracks.

In the twentieth century the nature of the village therefore changed drastically. Almost all the agricultural land (mostly orchards) to the north of the A6005 was converted into housing. A few of the old orchard trees were retained in some gardens. Most of the old farmhouses were demolished, and perhaps twelve buildings remain that are pre-1900. Almost no visible traces remain of Toton’s agricultural past.

The Toton Sidings site is popular with railway enthusiasts, who can often be seen with cameras and binoculars, viewing the sidings from the nearby A52 road, and the nearby Toton Bank, which gives a view of most of the depot.

Toton Sidings was announced, on 28 January 2013, as the site for a main station on the proposed High Speed 2 ("HS2") rail-link form Birmingham to Yorkshire (to Sheffield Meadowhall and Leeds).[2] 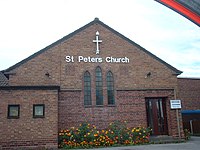 Manor Park (built on the site of the old Manor Farm) is a popular council park, with well maintained cricket and football pitches, tennis courts and a bowling green. This joins onto Banks Road Open Area, an extended strip of land along and between the banks of the River Erewash and its overflow channel, and stretching up along Toton Bank. These areas are managed collectively as Toton Fields Local Nature Reserve.

Toton Washlands is a nature reserve created by the Environment Agency to the west of Toton Sidings, that serves as flood defence for the River Erewash and sits to the east of the Erewash Canal. Although it is within the boundaries of Toton, due to the presence of the sidings it is only possible to access the area from neighbouring Long Eaton.