Torksey is a small village and parish in Lindsey, Lincolnshire, adjacent to the border with Nottinghamshire. The population of the civil parish at the 2011 census was 875.[1] It is situated on the A156 road, seven miles south of Gainsborough and nine miles north-west of the city of Lincoln, on the eastern bank of the tidal River Trent, which here forms the county border.

It is notable historically as the site of a Roman canal, a major Viking camp, the late-mediæval Torksey Castle and a Victorian railway bridge, the Torksey Viaduct.

The Foss Dyke, a Roman canal constructed in or about the 2nd century, joins the River Trent by way of a series of lock-gates about half a mile south of the village. 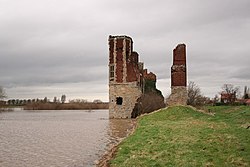 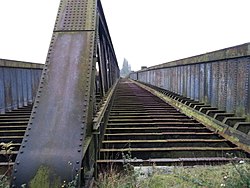 During the 9th century, Torksey was part of the Anglo-Saxon Kingdom of Lindsey. In the late 860s, a Viking invasion force known to the English as the "Great Heathen Army" conquered eastern England. In 871–2, the Vikings established a winter camp in London, but returned to Northumbria soon afterwards, following a rebellion against their rule. During 872–3, the Great Heathen Army established its winter quarters at Torksey.[2]

The now-Grade-I listed 16th-century Torksey Castle was destroyed in August 1645 during the Civil War; its remains are on the river side of the dike which separates it from dry land.

The Grade-II* listed railway viaduct over the Trent remains but it is no longer in use. Torksey Viaduct has two 130-ft spans across the River Trent.[3] It was built between 1847 and 1849 to carry the Manchester, Sheffield and Lincolnshire Railway (Clarborough Junction-Sykes Junction branch). It is of unusual design and is regarded as the first box girder bridge.[4] It was designed by Sir John Fowler, who had been influenced by Fairbairn and Stephenson's tubular bridges at Conwy and the Menai Straits. The tubular girder bridge was not initially accepted by the Board of Trade's inspector Lintorn Simmons;[5] this decision (and also the basic premise that a bridge designed by a member of the Institute of Civil Engineers which had passed all practical tests could be rejected by a railway inspector because he was uncomfortable with its novel design) was criticised by the ICE:[6] "The subject has been discussed in the Institution of Civil Engineers, and every eminent engineer was of the opinion that the Government inspector was clearly wrong". Threatened with a call for a parliamentary enquiry should approval continue to be withheld, the Railway Inspectorate reconsidered and approved the bridge un-modified.[7] Subsequently, and consequently, the Board of Trade took the view that (as it explained in defending itself from criticism that the defects in the Tay Bridge should have been seen and acted upon by the Railway Inspectorate): "The duty of an inspecting officer, so far as regards design, is to see that the construction is not such as to transgress those rules and precautions which practice and experience have proved to be necessary for safety. If he were to go beyond this, or if he were to make himself responsible for every novel design, and if he were to attempt to introduce new rules and practices not accepted by the profession, he would be removing from the civil engineer, and taking upon himself a responsibility not committed to him by Parliament."[8] Torksey bridge was strengthened in 1897 by adding a more conventional central truss above the deck rather than by strengthening the box.[6]

Both the castle and viaduct are on the Buildings at Risk Register.

The environmental charity Sustrans has carried out work on the viaduct in preparation for opening it as a walk/cycle-way[9] They obtained planning permission in 2015 for the paths, which Sustrans aims to link as a walking and cycling route to connect the quiet roads east of Torksey with those west of Cottam, a village about a mile to the west.[10]